At the weigh-in that concluded the Poppy’s Fishing Derby in Goshen on Saturday are, from left, volunteer Brian McKernan, Recreation Department Director Katie Hennessey and volunteer Dan Kobylenski. BZ photos

The trout stocked in a pond for the Goshen Recreation Department’s Poppy’s Fishing Derby slumbered through the event on Saturday, but none of the 13 children participating and their parents seemed to mind. Everyone was just happy to be outdoors and taking part in a tradition started by the late Richard (Poppy) Kobylenski 29 years ago.

Kobylenski, who died in 2006, was Goshen’s first selectman from 1969-91. He founded the fishing derby as a way to give children a chance to experience the outdoors using town-owned property on East Street South. The pond there served as the home of the derby until 2019, when the Recreation Department moved it to a larger pond on town-owned property on East Street North.

Recreation Department Director Katie Hennessey, on the job for two months, organized the derby and was assisted by Dan Kobylenski of Goshen, Richard Kobylenski’s nephew, and volunteer Brian McKernan. The derby was not held last year due to the pandemic.

Tackle boxes and fishing reels provided by Newbury Archery were won by Alexa Yuon, 8, Reed Leonard, 5, Colby Watley, 9, and Harrison Watley, 7, all of Goshen. Yuon was first among girls participating with .8 pounds of fish caught. Leonard was the overall winner with 2.7 pounds, followed by the Colby Watley with 1.9 pounds and Harrison Watley with 1.4 pounds. For his catch, Leonard earned a family fishing trip with Fishing Quiet Waters.

The weights of the catches were down a bit this year, which Dan Kobylenski attributed to the cold water of the pond lowering the activity level of the trout.

Nodine’s Smokehouse was back at the derby with its food truck serving complimentary breakfast, coffee and hot chocolate. Donations to Nodine’s from parents will be donated to the Recreation Department to help fund next year’s derby. 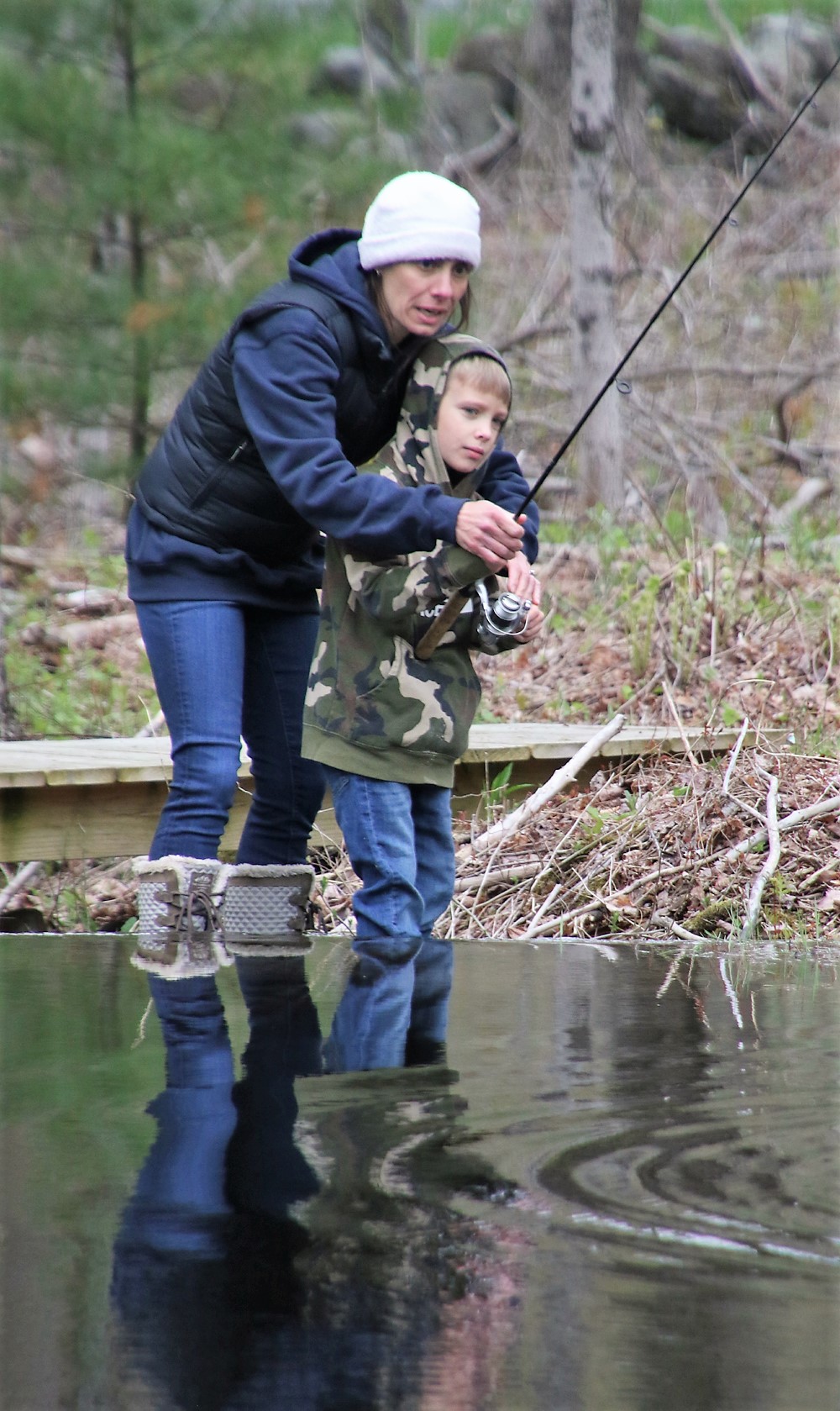 Shilo Garceau of Goshen and her son, Harrison, try their luck. 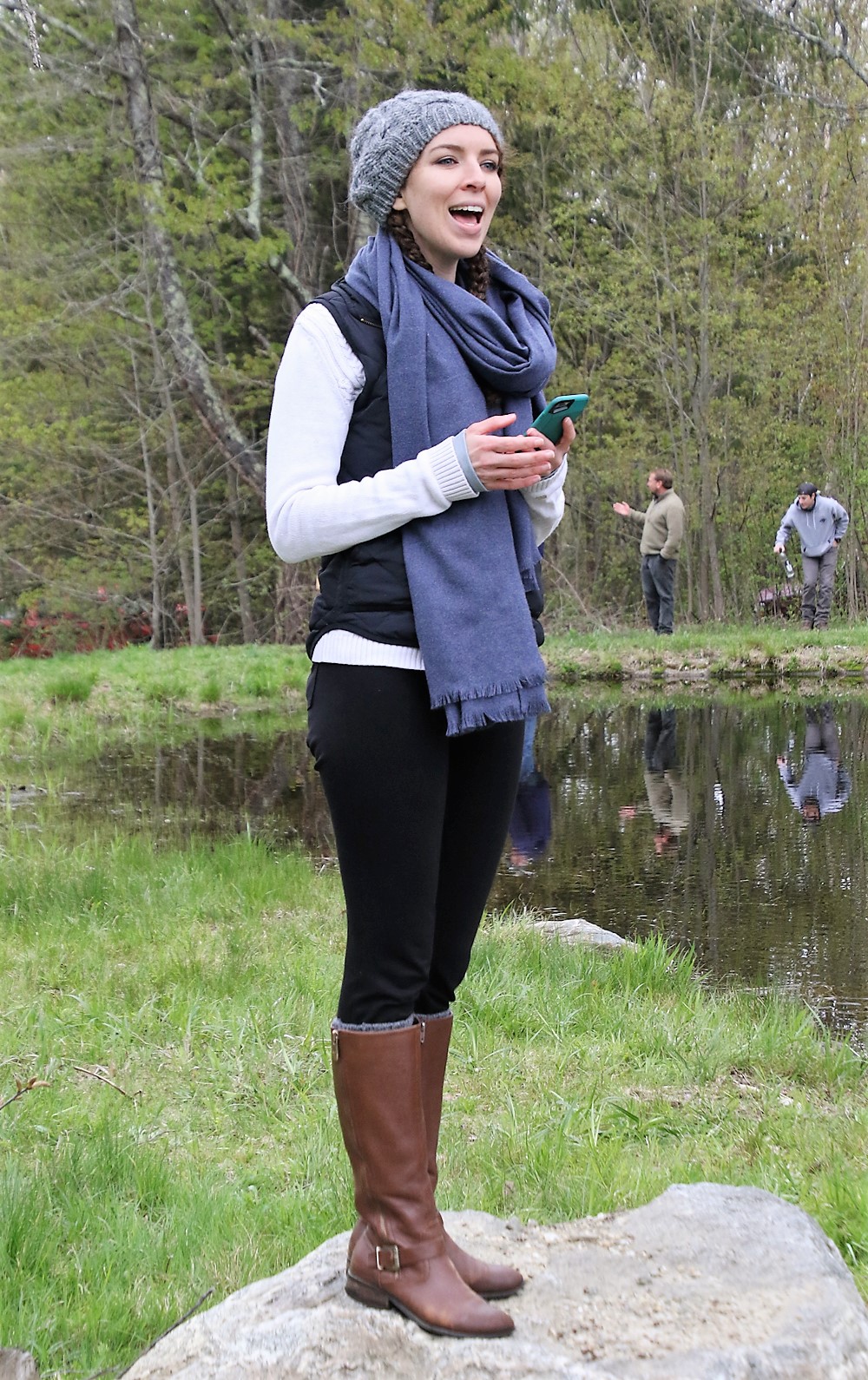 Recreation Director Katie Hennessey counts down the seconds in bringing the derby to a close. 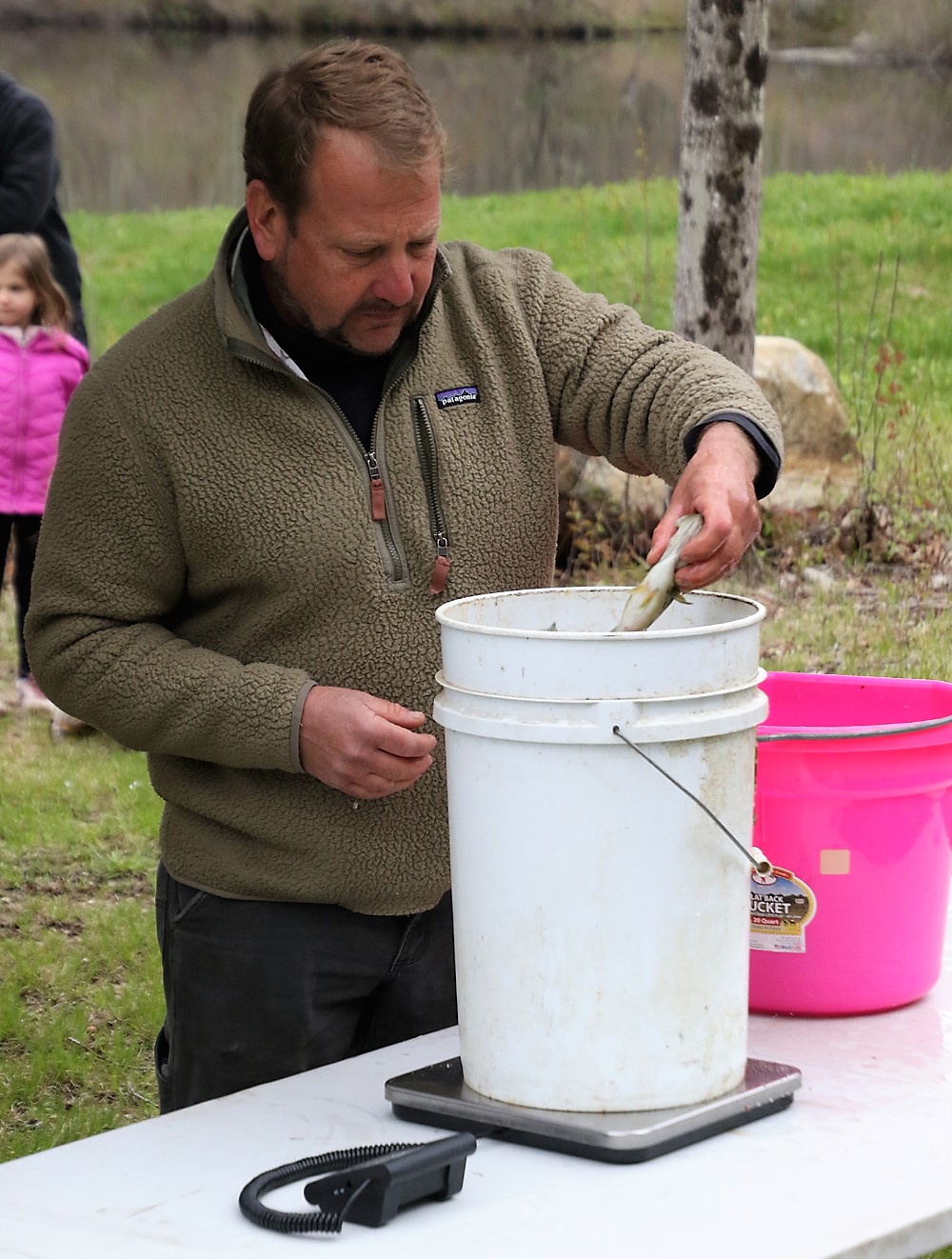 Dan Kobylenski was in charge of weighing the catch of each participant. 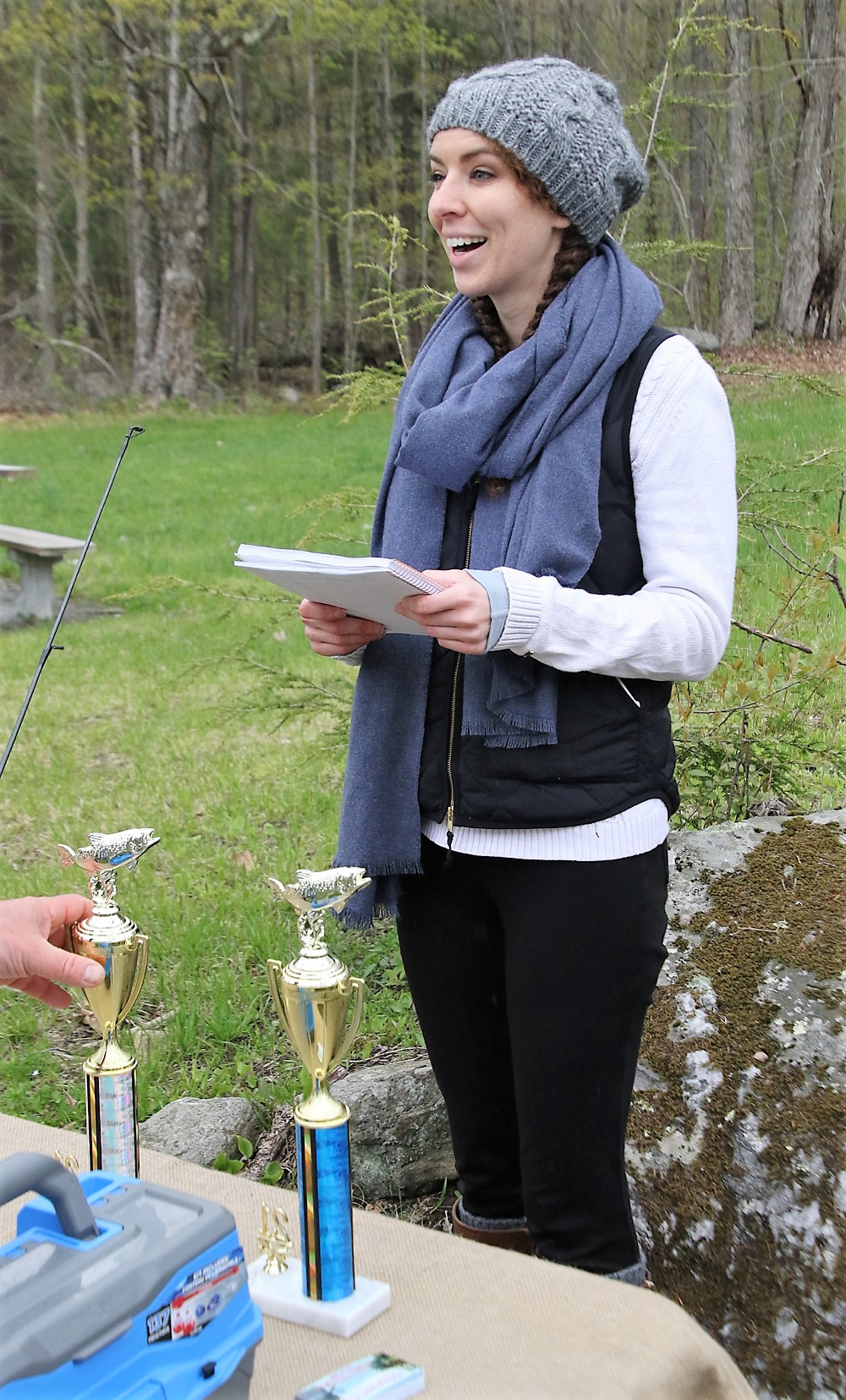 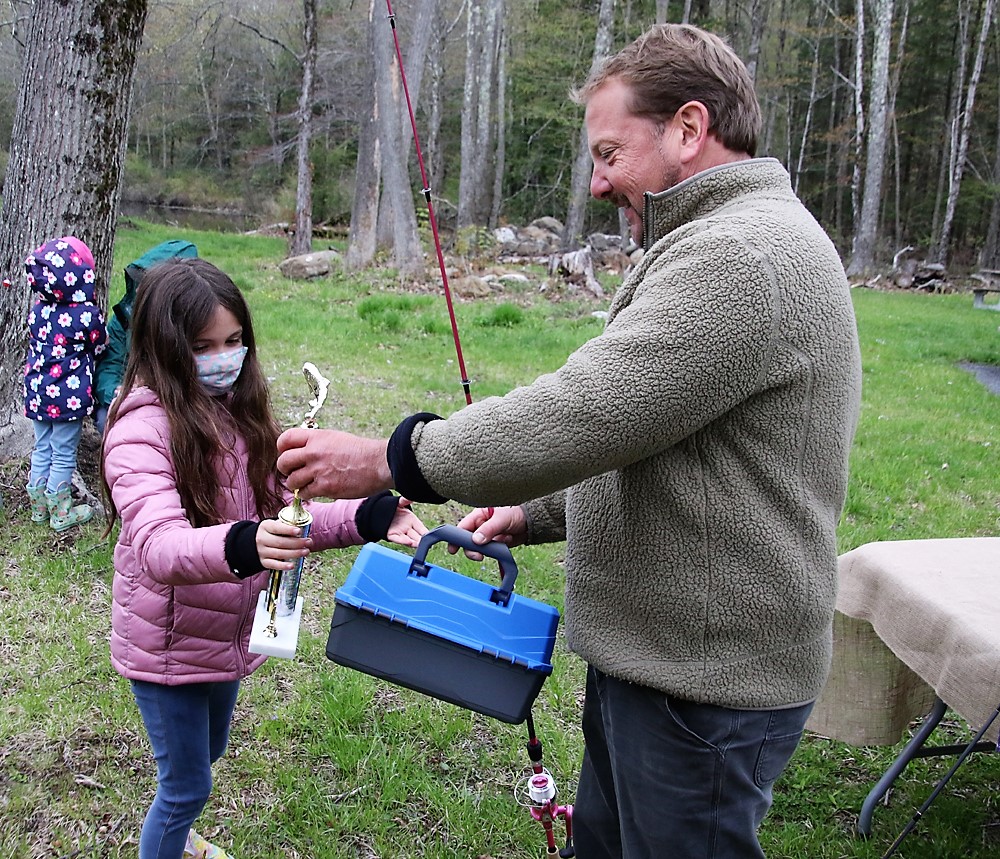 Alexa Yuon receives her trophy and prizes from Dan Kobylenski. 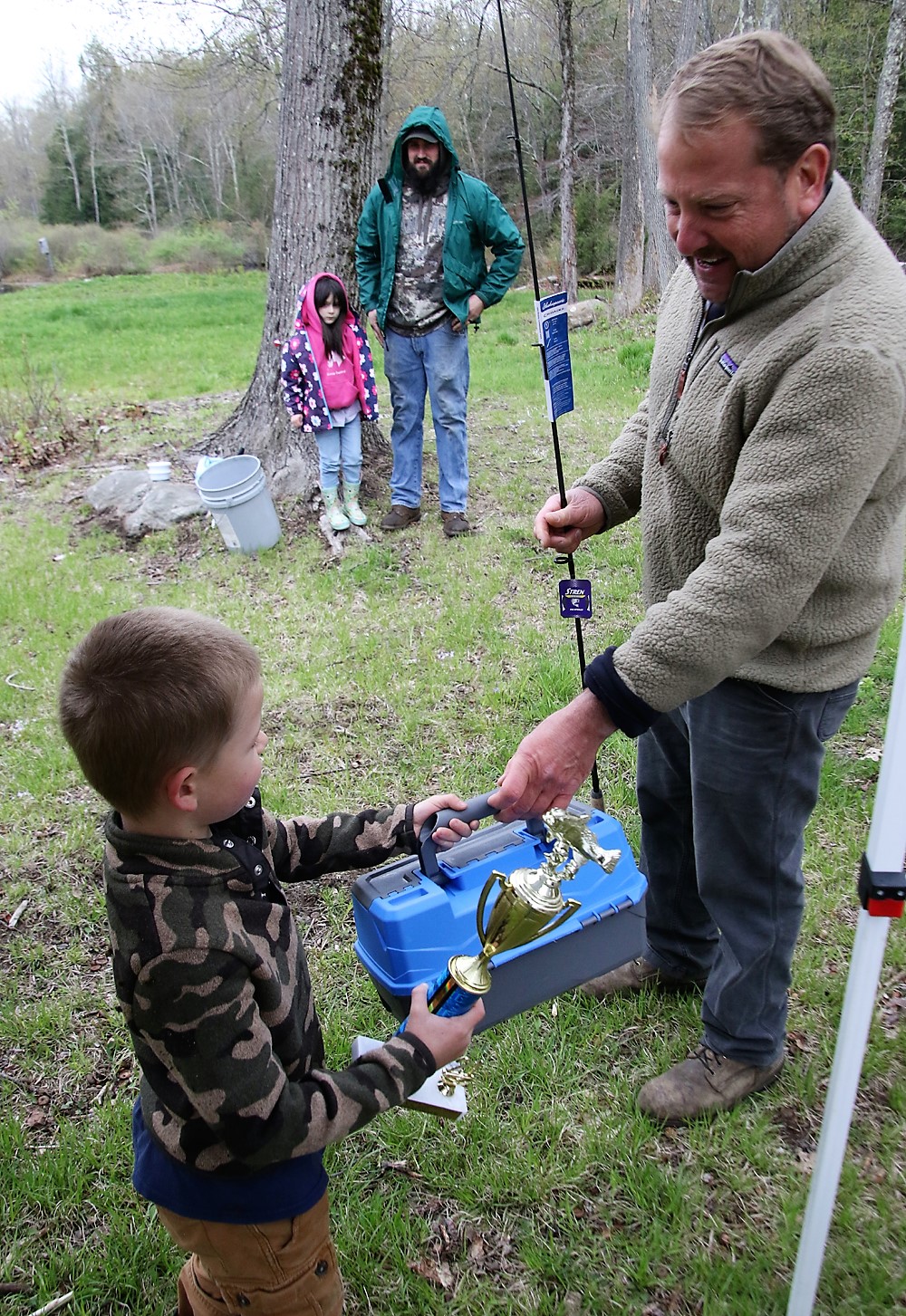 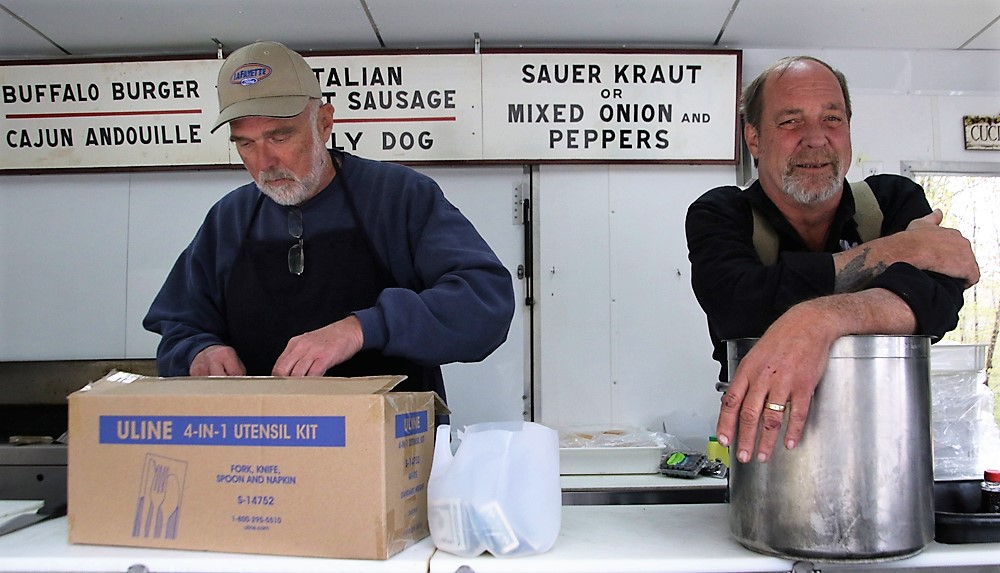