Colorful crosswalk to have short lifespan 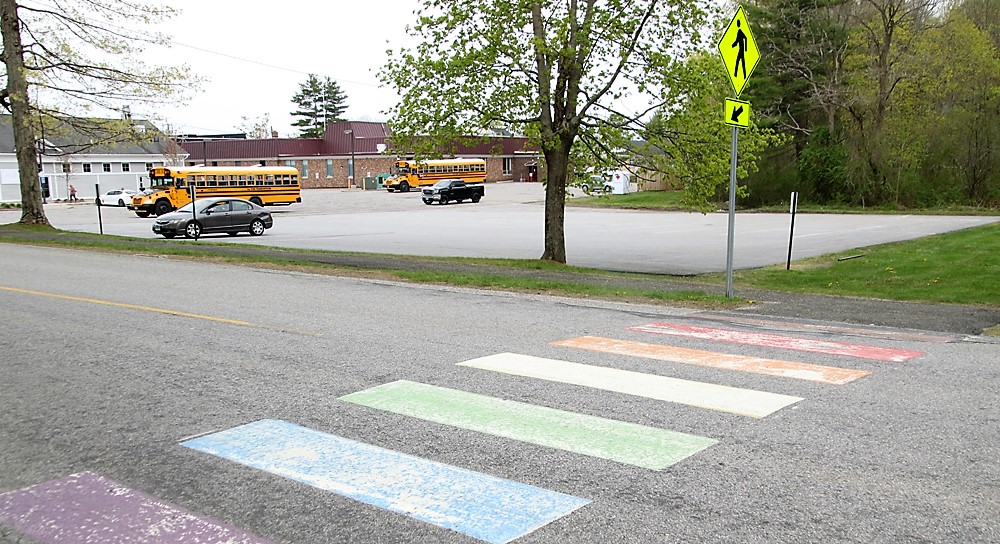 The colors of the crosswalk on North Lake Street at Community Field will be refreshed later this month and the asphalt in between the colors will be painted white to improve visibility, but the crosswalk is expected to be returned to its all-white color in the future. BZ photo

The North Lake Street crosswalk painted in the colors of the rainbow in a show of Litchfield’s welcoming of diversity is going to be a short-lived expression.

In the wake of concern raised about safety at the crosswalk, First Selectman Denise Raap on Tuesday told the Board of Selectmen that the crosswalk’s original white coloring would be returning in the near future.

“We will be reverting back to the original color,” Raap said.

Selectmen have given a group of residents permission to refresh the year-old colors this month. As part of the touchup, white paint will be applied to the bare asphalt strips in between the colored strips upon the advice of public works Director Raz Alexe, who said the white paint is designed to improve the visibility of crosswalks, especially at night. With improved visibility comes improved safety for pedestrians.

Alexe and Raap both said there are plenty of non-crosswalk asphalt areas in town where paint could be applied to show the town’s acceptance of diversity.

“We’ll encourage them to find another area where safety won’t be a concern,” Raap said.

Once the colors of the crosswalk fade, which should happen by fall, the crosswalk will be painted all white, according to the first selectman.

The crosswalk was the subject of a discussion by the town’s traffic safety community action group during its recent meeting. Some members of the group Raap established last fall in the wake of two accidents involving pedestrians and motor vehicles in the center of town said the crosswalk painted in colors is a safety issue that should be addressed by returning the crosswalk’s all-white color.

In its current state, the crosswalk doesn’t meet safety standards and won’t even with white strips added to it, according to group member Edward Fabbri, a retired city of Torrington engineer. Fabbri and group member Dirk Patterson, the warden of the Borough of Litchfield, said an accident at the crosswalk would put the town in legal jeopardy.

The crosswalk is one of many in and near the center of town that the group is evaluating ahead of a road safety audit that will be funded by the state Department of Transportation. The DOT has approved the town’s application for the audit and will hire a consulting firm to do the work.

The goal of the audit is evaluate crosswalks and town roads, consider data that has been collected by volunteers, and use it all to develop a set of recommendations for improving pedestrian safety in town.