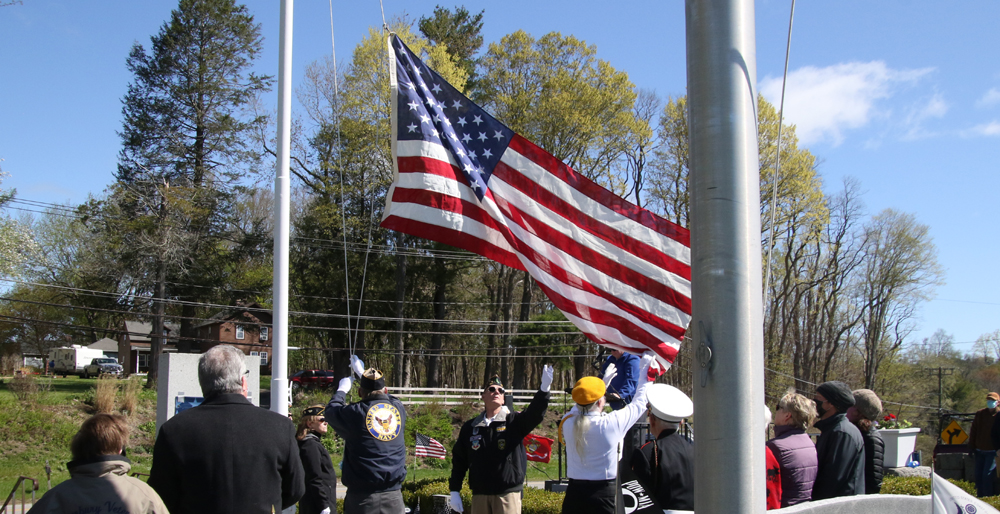 American Legion Post 44 of Bantam honored a casualty of the Iraq War as its veteran of the month on Saturday. BZ photos

Army Sgt. Joseph M. Nolan, who was killed in 2004 while serving during the Iraq War, was honored as the veteran of the month by American Legion Post 44 of Bantam on Saturday.

The 379thth consecutive veteran of the month service was held at the All Wars Memorial in Bantam. Nolan’s grandfather, World War II Navy veteran John W. Nolan, was the veteran the month in October 2015.  The flag used in Saturday’s service is the same flag that draped the caskets of Joseph M. Nolan and John W. Nolan during their funerals.

Joseph M. Nolan was born March 10,  1977 at Saint Mary’s Hospital in Waterbury, the son of Joseph P. Nolan and the late Inga Martinson Nolan. He lived in the north end of Waterbury and attended Regan School. He moved to Wolcott in 1986 and attended Alcott Middle School. He was a 1995 graduate of Wolcott High School, where he played football for the Wolcott Eagles as an offensive lineman.  Nolan was a 1999 graduate of Saint Joseph’s University in Philadelphia, Pa., where he majored in international relations and minored in the Japanese language.

From his earliest days, Nolan had exhibited an insatiable thirst to engage and influence the world around him. To those who knew him, there was little doubt that he was insightful and intelligent beyond his years.

Many expected Nolan to follow in the footsteps of his fellow classmates in college by pursuing a career in the civilian world, but he had other ideas. Although educated in the Jesuit tradition, he was also part of another legacy – that of service to his country in time of war. Joe’s great-grandfather had served in World War I, his grandfather served in the Navy during World War II, and his father served as a rifleman with the 1st Platoon, Golf Company, 2nd Battalion, 26th Marine Regiment in Vietnam in the spring of 1969.

In 1999, Nolan joined the long line of Nolans who had answered the call to the colors when he enlisted in the Army. His interest in, and aptitude for foreign languages, would lead to his being chosen to attend a highly selective 63-week course in Arabic at the Defense Language Institute in Monterey, Calif. He would finish fourth in his class of 18. His training at Monterey began in the early summer of 2001. But by that time the world had changed forever for America and for Nolan.

After his training, Nola was assigned to B Company – the 312th Intelligence Battalion –   First Cavalry Division – at Fort Hood, Texas. The fall of 2003 found the battalion in Baghdad. In early November 2004, he was sent to Fallujah to provide critical-language and cryptologic support to coalition troops in the area. Cryptologists must be versatile and skilled in the areas of language, technology and mathematics. In time of war, these skills must be made available to those closest to the battle’s fray.

Nolan excelled in this kind of environment. Sometimes he was a translator. On other occasions, he was involved in moving critical information to those in harm’s way. But in whatever the capacity he served, his work was crucial in helping to save the lives of soldiers and civilians alike.

Life in the military is one of constant service and sacrifice. Sometimes those who wear the uniform of our nation are called upon not only to endure hardship, but also to make the ultimate sacrifice in defense of freedom.

At 9:17 p.m. on Nov. 18 2004, Nolan lost his life when an improvised explosive device struck his vehicle. Nolan died never knowing that his sacrifice, and the sacrifices of thousands like him, had brought the possibility of freedom and liberty to a land that had known torture and fear for decades. Nolan saved countless American and Iraqi lives based his service and his ability to speak Arabic.

Back in Connecticut, the Republican-American reported on that November morning that a wooden placard greeted cars pulling into the parking lot at Wolcott High School for the annual Thanksgiving morning football game. The hastily scrawled message simply said: Game Canceled.  That morning, Wolcott’s athletic director and head football coach Joe Monroe remembered his former player as someone who really just wanted to be part of the team. “He wasn’t a standout. He wasn’t a name or a face a lot of people would remember, but he was the kind of kid who would do absolutely anything you asked him to do.” Coach Monroe’s words were meant to honor Nolan, but in a larger sense, he was also describing the uncanny ability of common Americans to overcome uncommon challenges no matter what the cost.

Nolan’s awards and decorations include:

In addition to his father, Nolan is survived by a brother, Matthew J. Nolan of Devon, Pa., and a sister, Martha M. Nolan, of Waterbury. 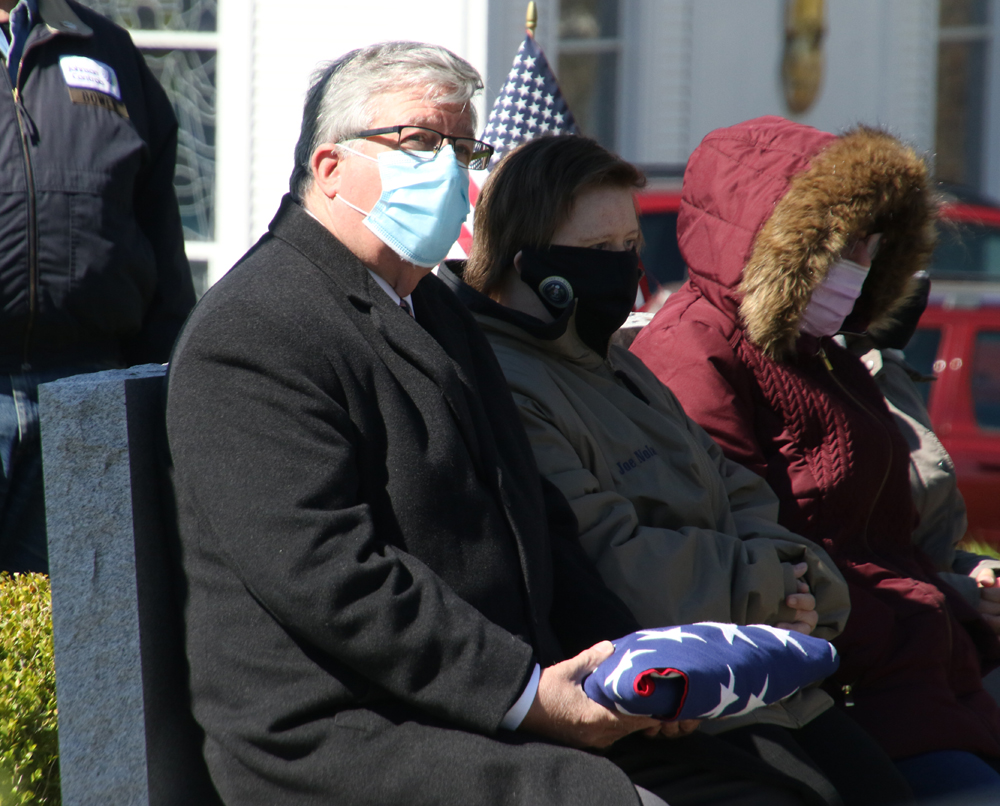 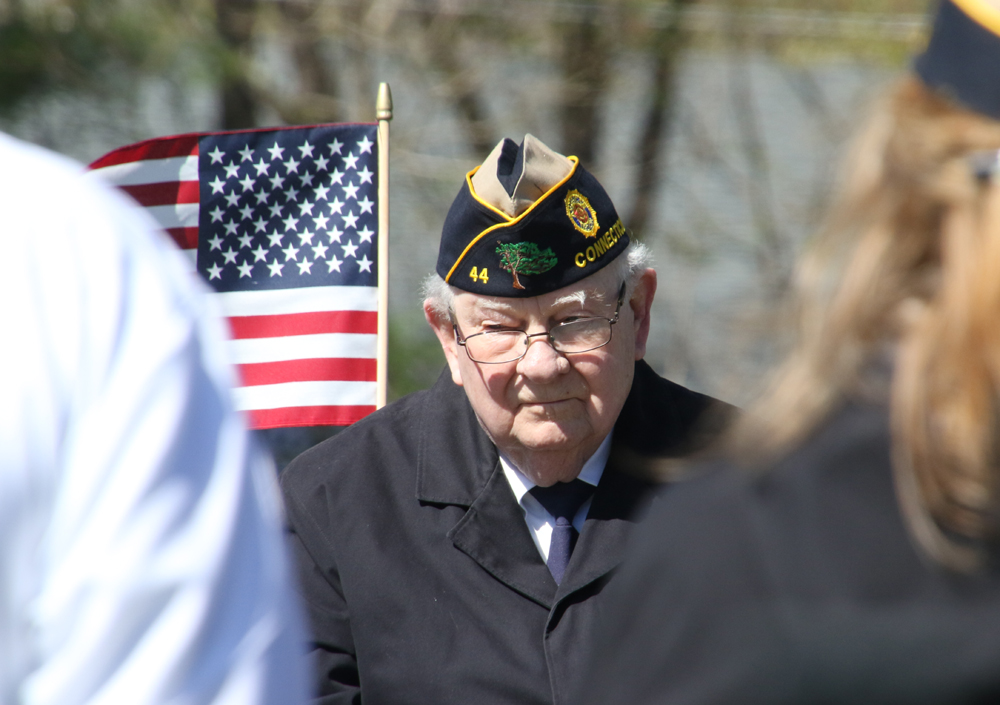 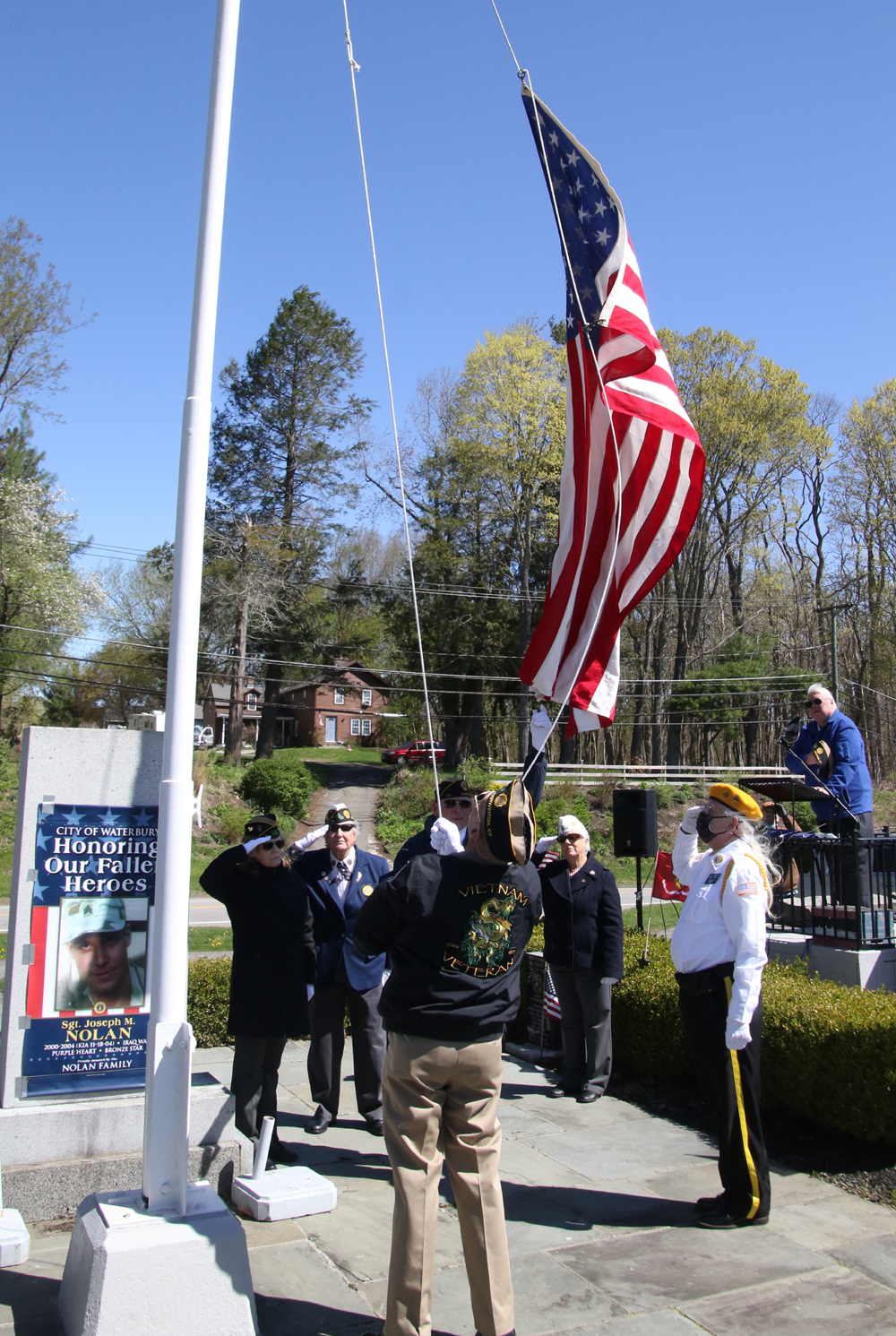 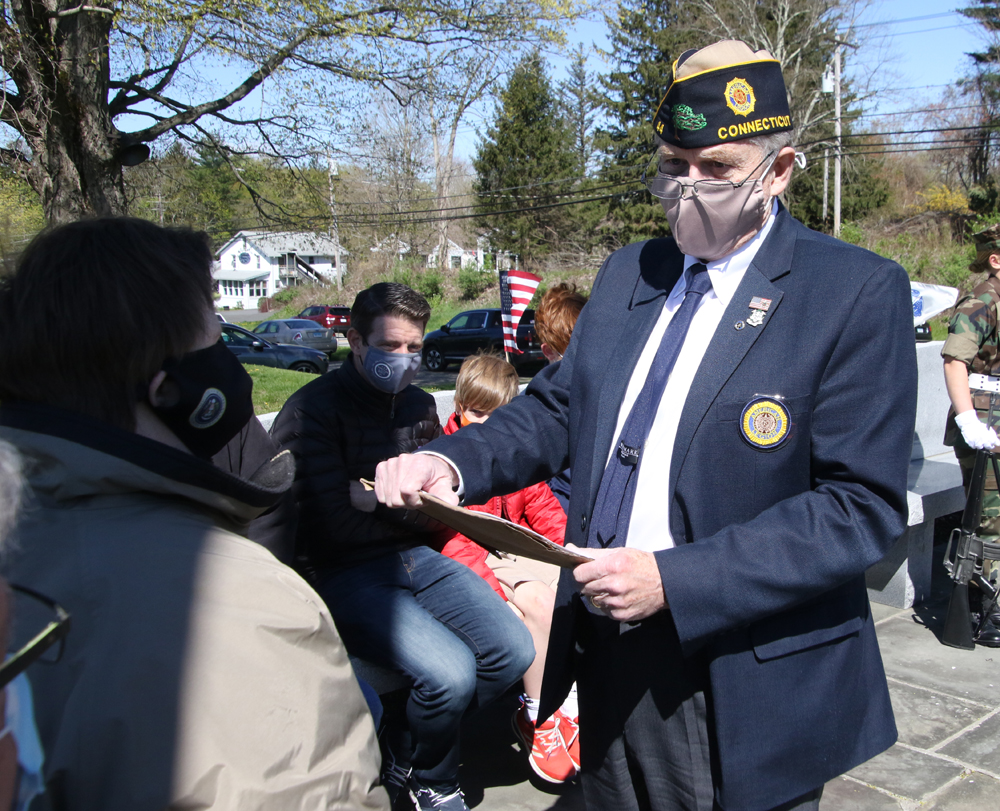 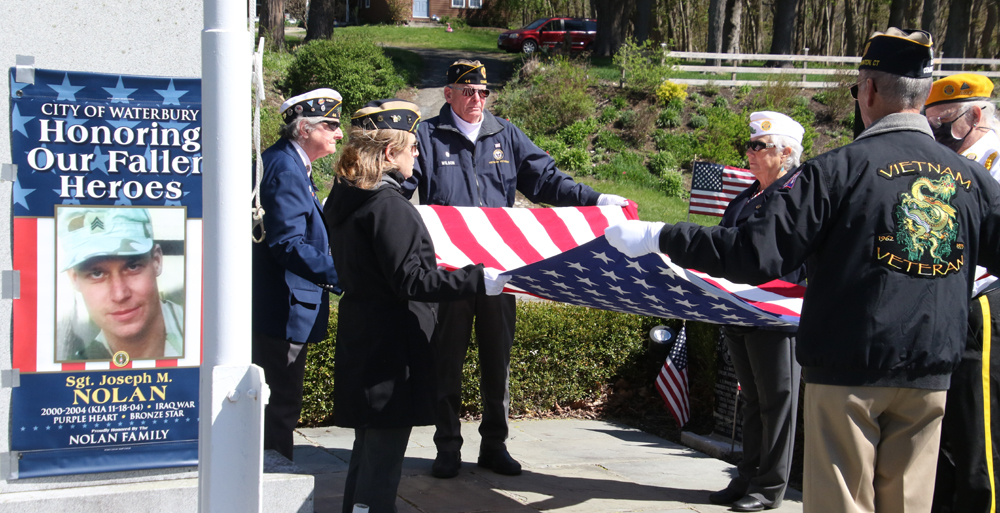 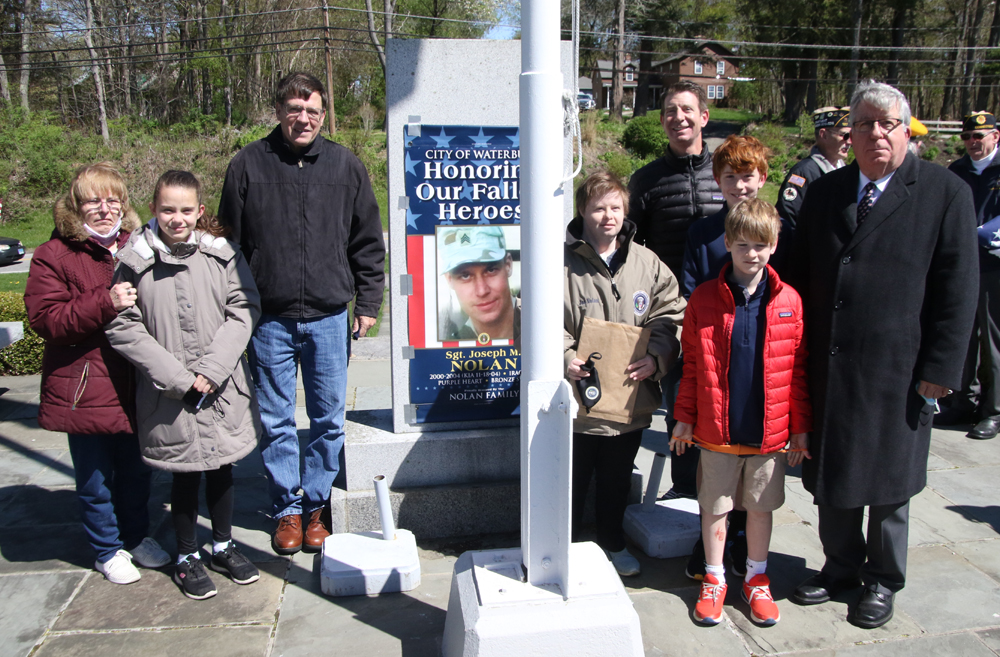 The family of Joseph M. Nolan gathers after the service.