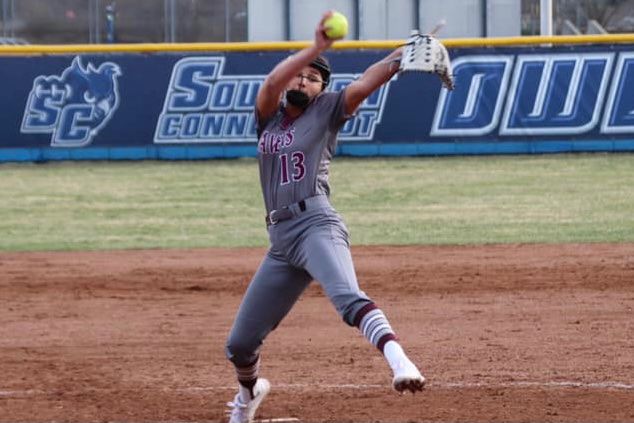 An understudy of the workhorse right-hander is another former Wamogo All-State hurler, freshman Samantha Sylvester of Morris.

Zemaitis, a senior, is off to a strong start as she has gone 5-1 with an earned-run average of 0.68 in the Ravens’ first 12 games. In 31 innings, Zemaitis has given up 13 hits and three earned runs, struck out 55 and walked four. She has three complete games.

“Cyrena has an ability to hit spots and control the game,” Franklin Pierce coach Andy Klaus said Wednesday. “She understands the strengths and weaknesses of the hitters and knows how to exploit them.”

Sylvester is 1-0 with an ERA of 1.75 over 12 innings spanning three starts. She has yielded 12 hits and three earned runs, struck out eight and walked two.

“She’s going to be a force for the next three years,” Klaus said of Sylvester. “The sky’s the limit for her. She’s very similar in style to Cyrena and we’re excited about what lies ahead for her.”

Franklin Pierce is 8-4 overall and 7-3 in the Northeast-10 Conference in Klaus’s third season at the helm.

Zemaitis made an immediate impact as a freshman in 2018, going 8-9 with an ERA of 1.90 for a team that was building a foundation for the success it is enjoying under Klaus. She started 17 games, completed 13 of them and struck out 138. As a sophomore, she was 6-10 with an ERA of 1.98 and 138 strikeouts. She was named to the All-Northeast-10 rookie team.

Through her first two seasons, Zemaitis was already Franklin Pierce’s career leader in ERA (1.94), was second in career strikeouts with 268, and was ninth in career wins with 14.

“Cyrena has had a tremendous four years,” Klaus said. “She works hard in the weight room, puts in extra work, is a student of the game and is a leader for the team. The success she has had is a testament to her hard work.”

Zemaitis, Klaus added, has great presence in the pitching circle and heads a pitching staff of six arms that all have the ability to get the job done.

At Wamogo, Zemaitis was a two-time All-State choice and three-time All-Berkshire League selection. She is majoring in health sciences at Franklin Pierce.

Sylvester was a two-time All-State and three-time All-BL player at Wamogo. She too is majoring in health sciences.

The successful experience Zemaitis was having at Franklin Pierce helped in the recruitment of Sylvester, according to Klaus.

“Samantha was a huge get for us,” he said. “She is tremendous on and off the field and has an effervescent personality that rubs off on her teammates.”

Zemaitis and Sylvester both played for Dave Sylvester, Samantha’s father, at Wamogo.