The driver of this car, on her way to work in Canaan early Wednesday morning, was unaware Route 63 north of the center of Goshen was blocked by a fallen tree after Tuesday’s storm. She drove through a set of orange cones blocking the road and beneath yellow caution tape before running into the tree. The car’s windshield was shattered by the collision, but the woman was not injured. BZ photos

Widespread power outages in Litchfield, Goshen and Morris were gradually easing on Saturday, while in Warren 739 utility customers, or 87.1 percent of the town, were still without power as the area works to bounce back from the quick but devastating punch of Tropical Storm Isaias.

In Litchfield, 1,562 customers, or 33 percent of the town, were without power Saturday night, a number that decreased from a high of 55 percent after the storm blew through on Tuesday. Outages in Goshen, where 99 percent of the town was without power through Friday, were 595, or 30.8 percent. Morris had 328 outages on Saturday night, of 23.3 percent.

Eversource Energy crews working with out of state utility crews are attempting to restore power to 99 percent of Eversource customers by 11:59 p.m. on Tuesday.

The storm left many roads in Litchfield, Warren, Morris and Goshen closed. Trees or tree limbs either fell on roads or fell on wires, forcing the roads to be closed. Most roads have since reopened.

Litchfield’s community emergency response team swung into action on Wednesday after First Selectman Denise Raap declared a state of emergency in town. The CERT team has been manning the Litchfield High School gym, where showers, WiFi and phone charging are available. The gym will be open on Sunday from 6 a.m. to 2 p.m. Potable water is also available outside the gym.

Goshen’s CERT team has been on the job too in the wake of First Selectman Robert P. Valentine declaring a state of emergency on Tuesday as the storm intensified. The CERT team will be at Town Hall again on Sunday from 8 to 10 a.m. distributing bottled water and ready to eat meals supplied by the Connecticut Army National Guard. Potable water and phone charging are also available at Town Hall. 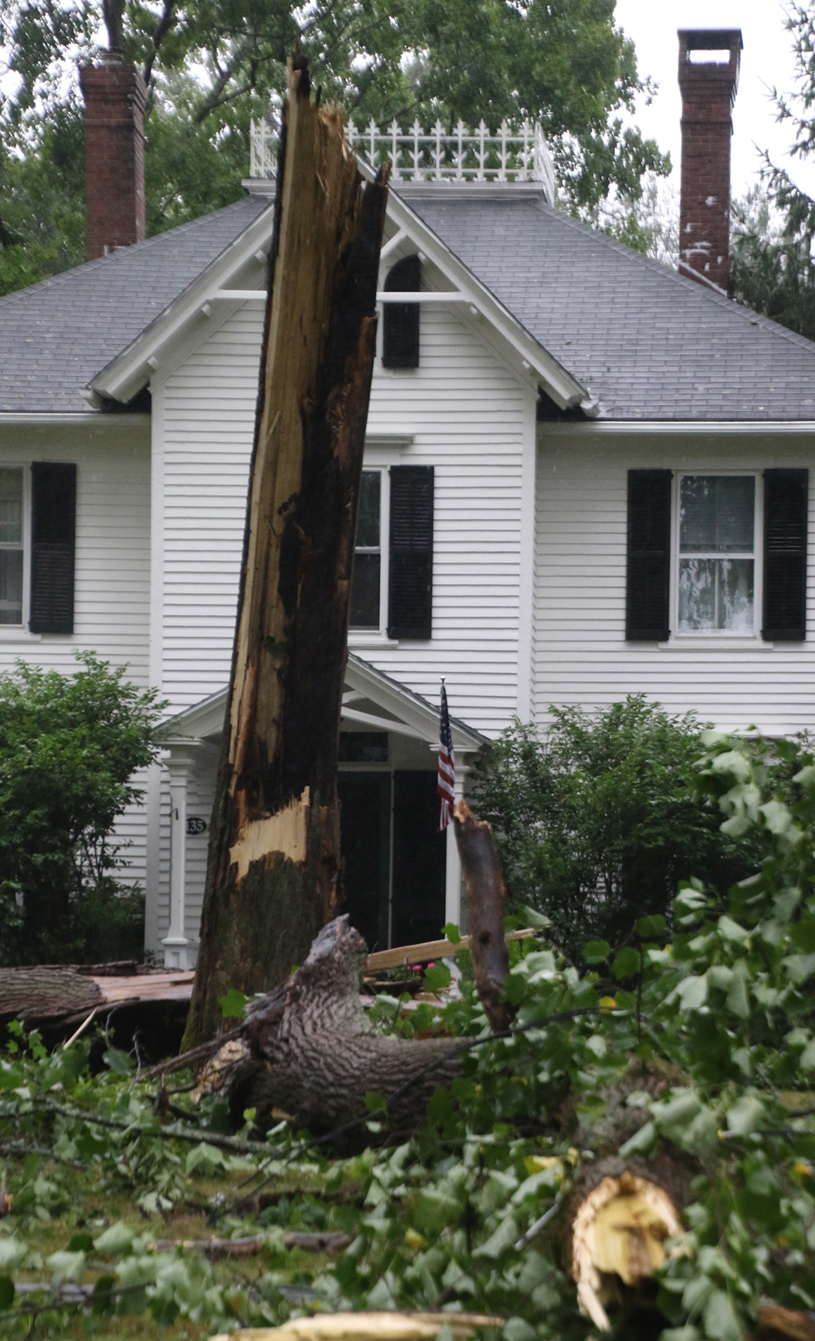 A tree in front of a home on South Street in Litchfield snapped off near its base and fell on wires, knocking out power to the area. 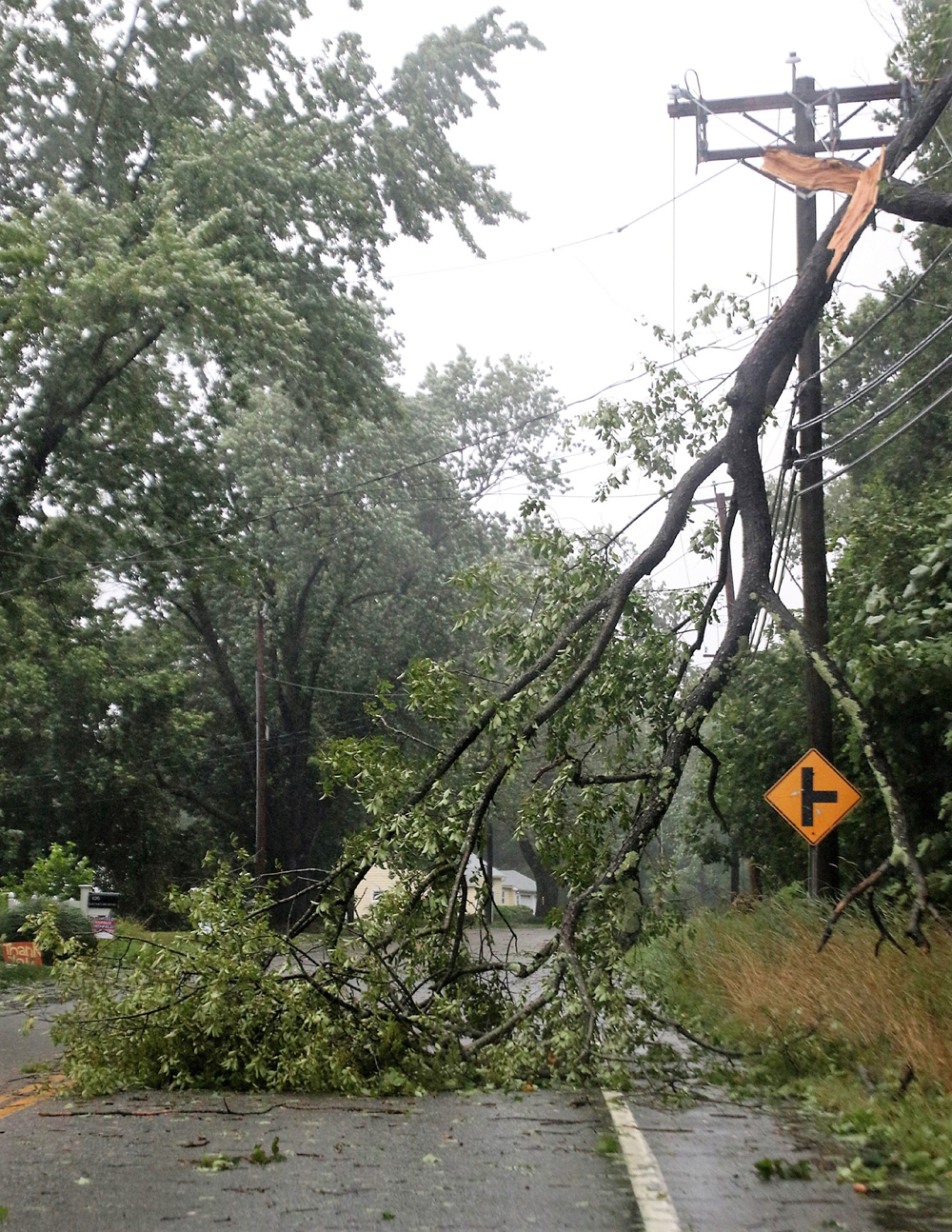 The northbound lane of Route 209 near Bantam was blocked by a fallen tree limb on Tuesday. 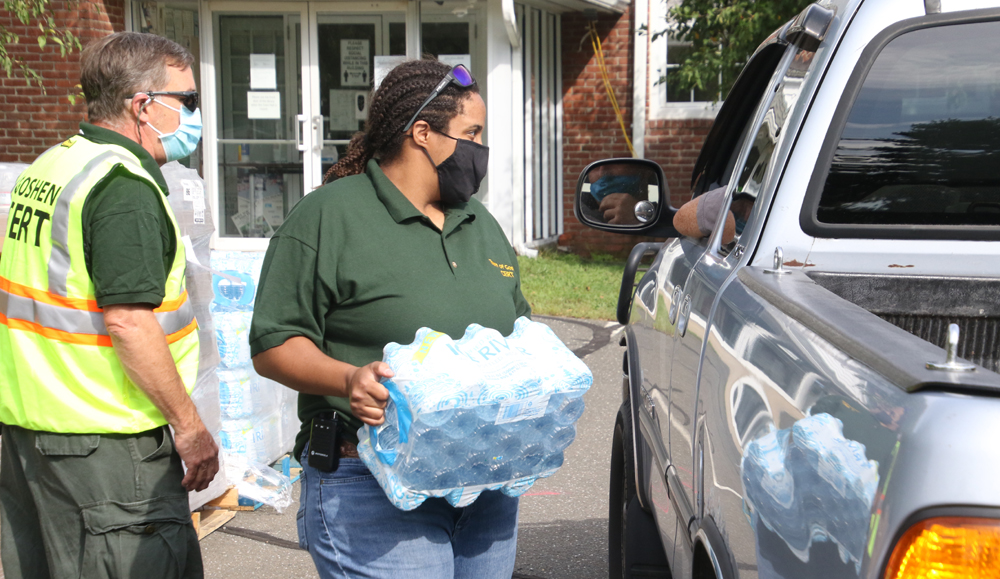 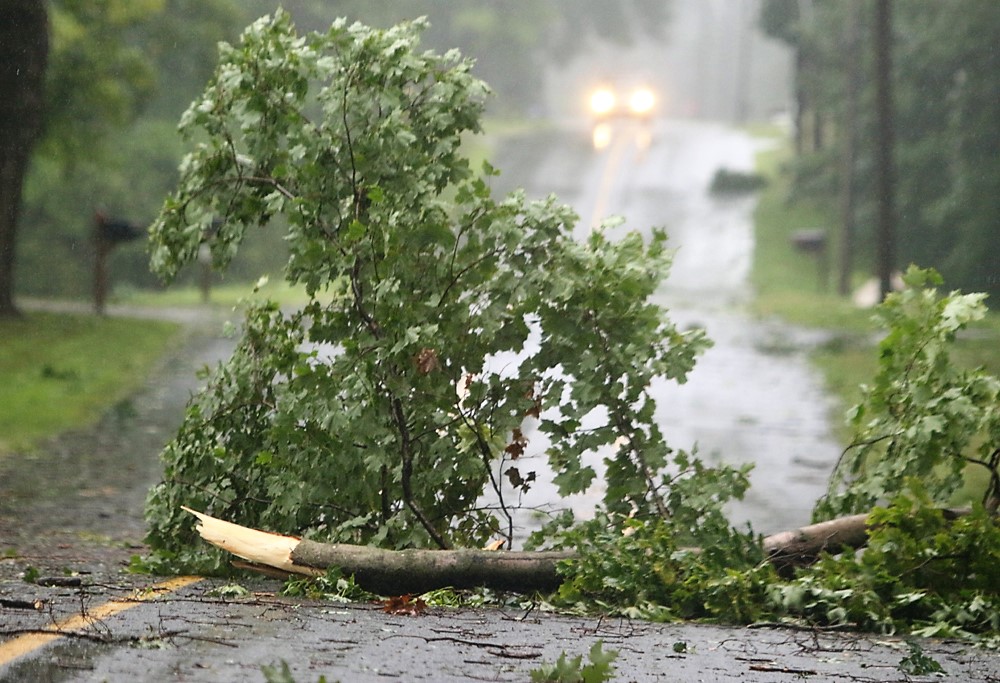 A tree limb blocks one lane of Prospect Street in Litchfield following the storm. 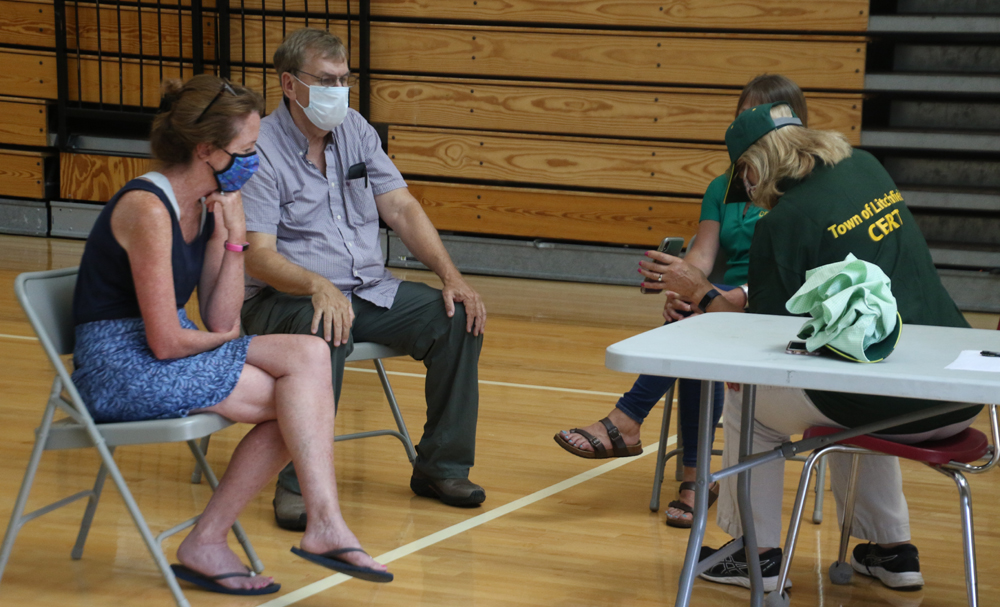 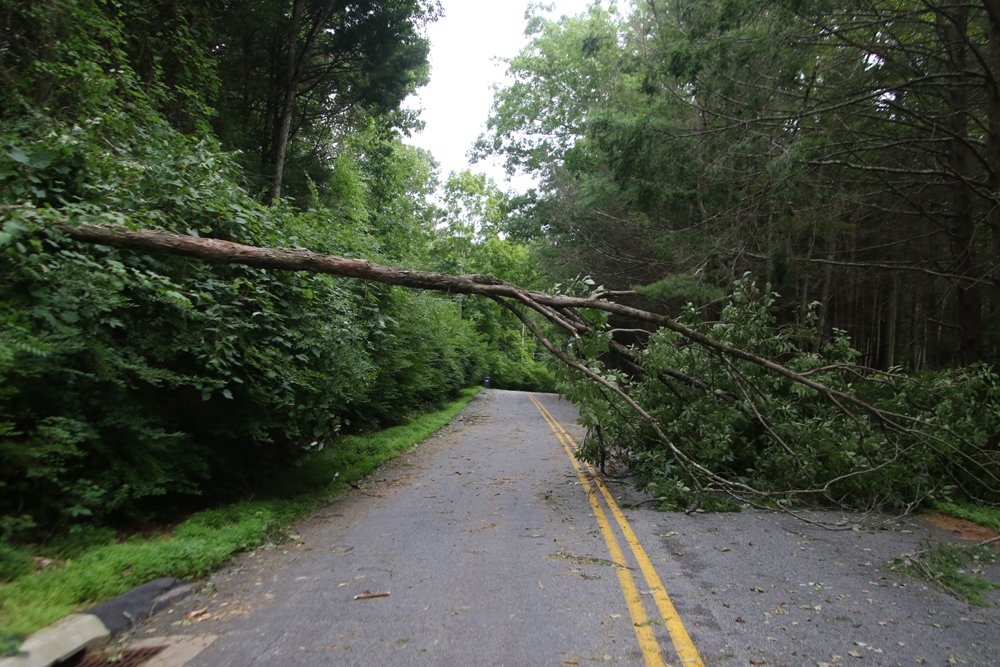 A fallen tree being held up by wires kept Cathole Road in Bantam closed through Thursday.

A Goshen resident uses a phone-charging station at Goshen Town Hall on Thursday. 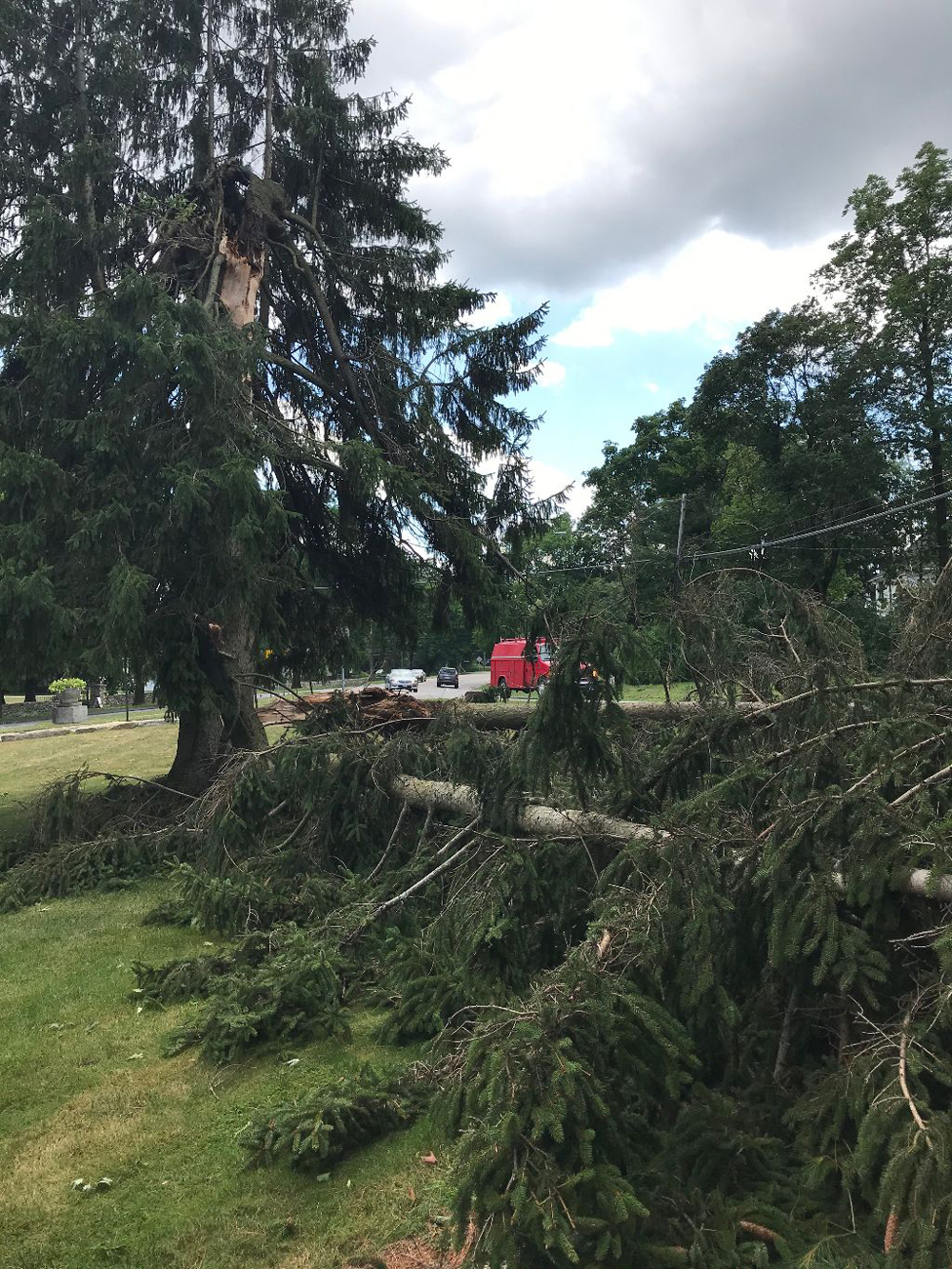 A landmark evergreen tree in front of Bill O’Shaughnessy’s home at the corner of North Street and Norfolk Road in Litchfield was a casualty of the storm. 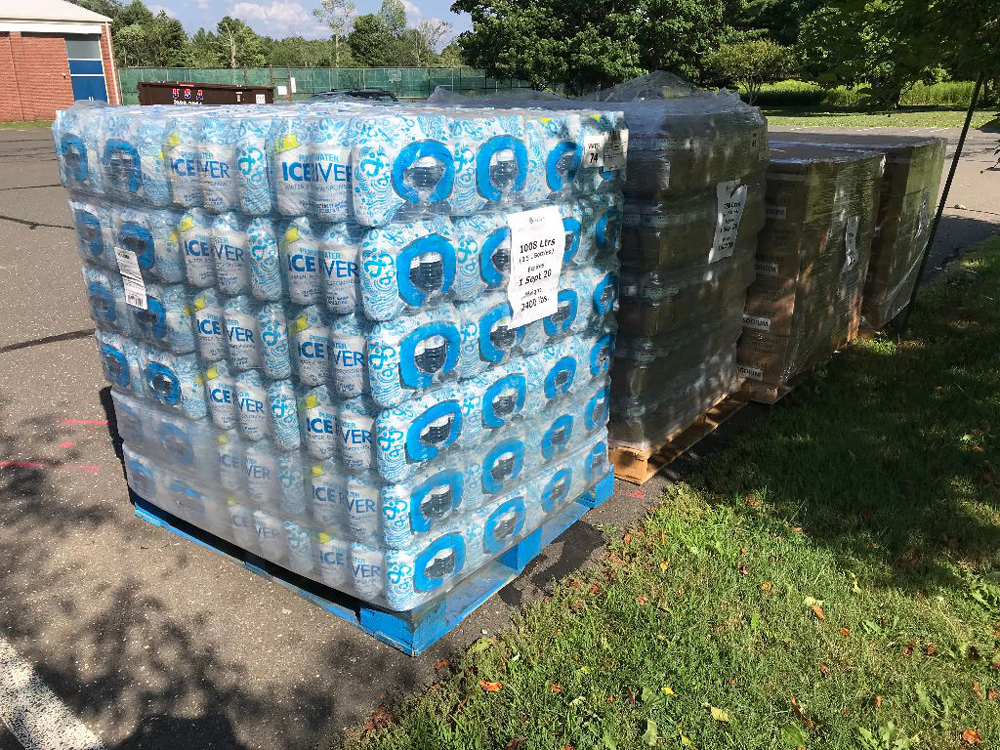 Bottled water and ready to eat meals were stacked at Goshen Town Hall on Thursday. 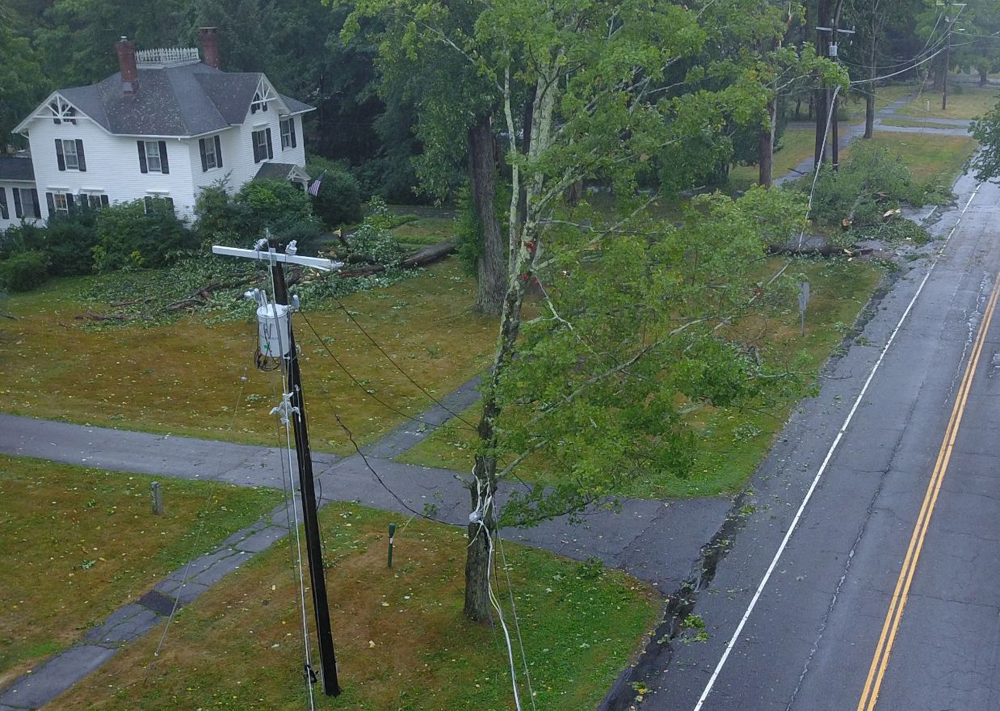 An aerial view Tuesday of wires damaged by a fallen tree on South Street in Litchfield. Peter Tavino photo 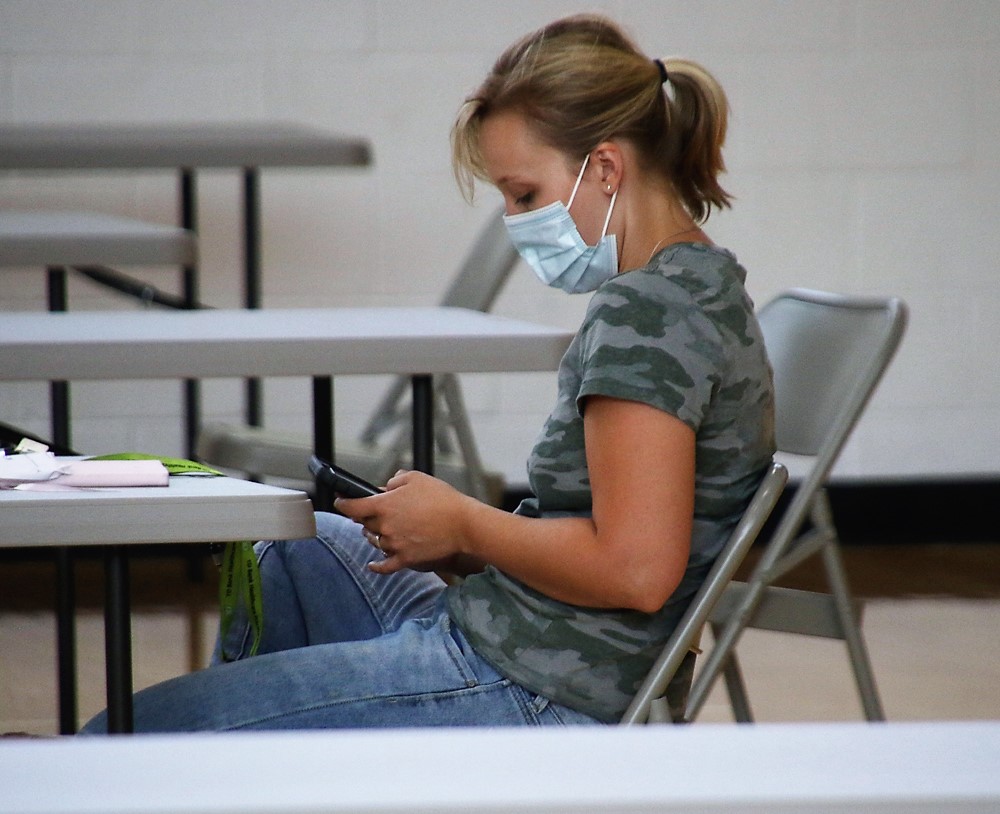 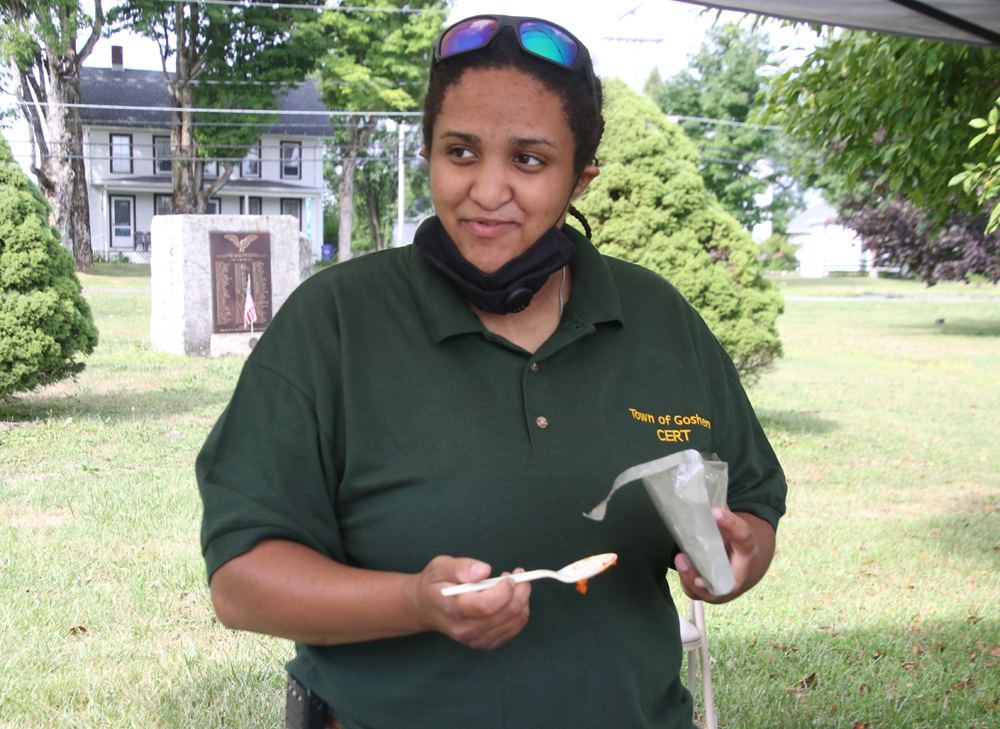 Anna Diehl, a member of Goshen’s community emergency response team, samples one of the ready to eat meals available to town residents at Town Hall on Thursday. 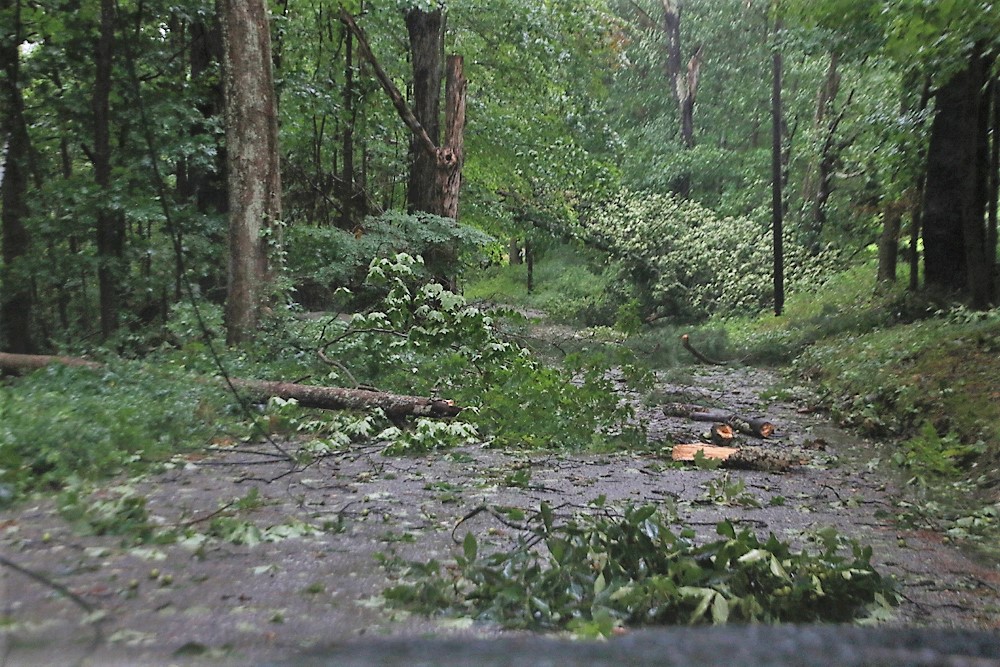 Duck Pond Road in Litchfield was left impassable by the storm. 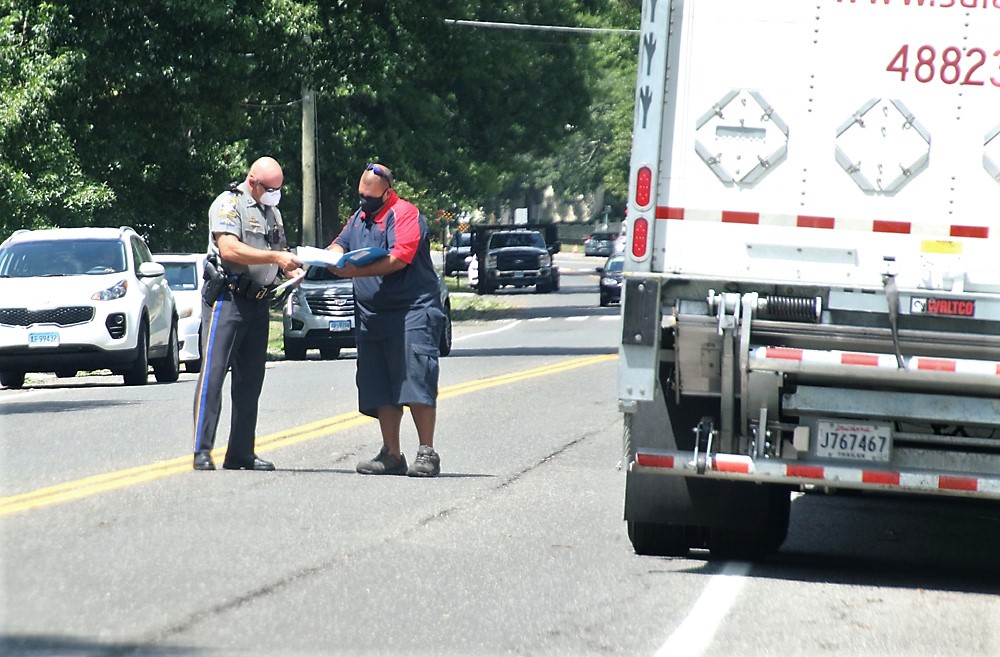 Litchfield Resident Trooper Jim Holm is given information by a truck driver whose rig struck dangling wires on South Street and knocked them to the ground on Wednesday, forcing part of the street to be closed. 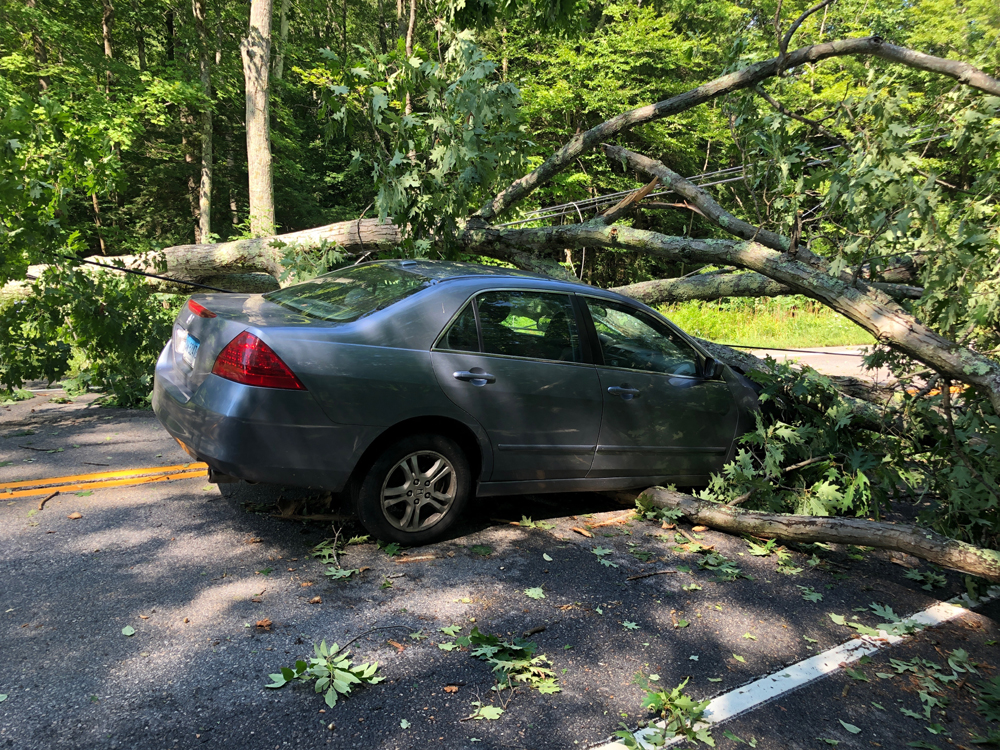 The driver of this car escaped injury after her vehicle collided with a tree that had fallen across Route 63 in Goshen. Contributed photo 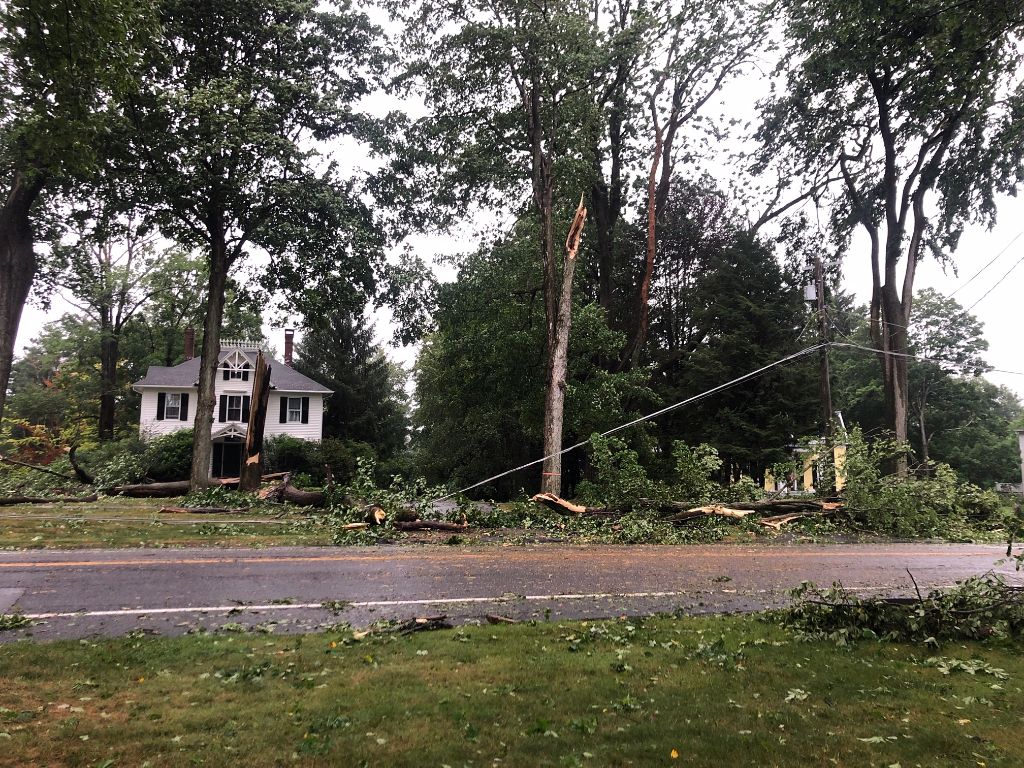 South Street in Litchfield was littered with downed trees, tree limbs and wires after the storm. Contributed photo 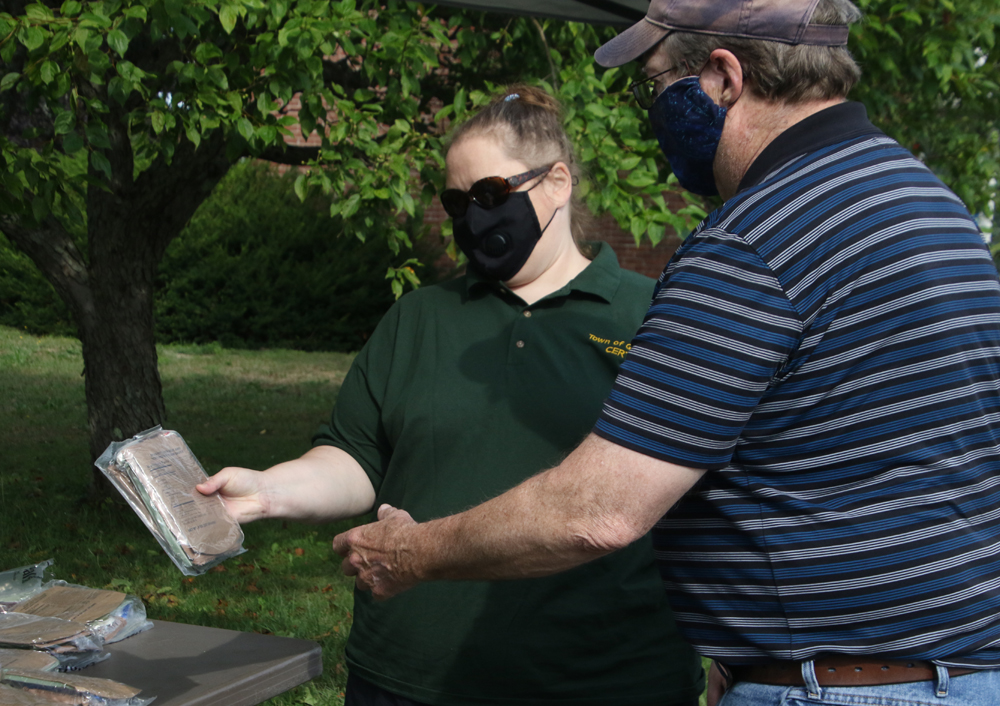 Tammy Diehl of the community emergency response team in Goshen shows a ready to eat meal to a Goshen resident on Thursday. 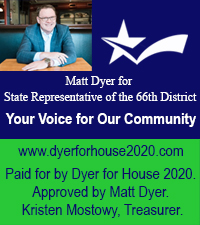 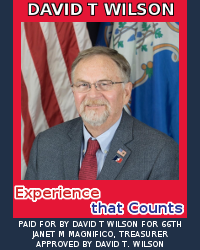