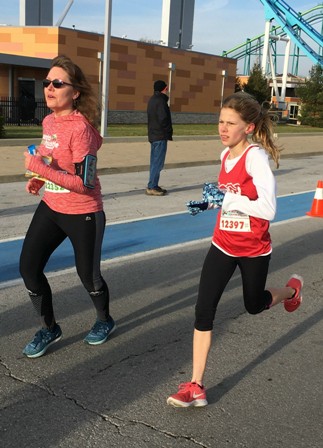 Johnston siblings Abbie, Caleb, Alexis and Micah and their dad, Lee, joined 1,057 other runners in a flat and fast race. All rrepresent the Litchfield Track Club.

Abbie was fourth overall and was first female finisher in a personal-best 18:18. Lee was 10 seconds behind his daughter in 18:28, good for first in the male 40-49 division. Caleb was 14th overall in 19:32 and second in his age group. Alexis and Micah ran in the accompanying 1-mile race.

Abbie and Alexis will be among nine LTC runners competing in the national championships.
Caleb Johnston, above, finishes the race. Below, Micah and Alexis Johnston.
Back to Sports