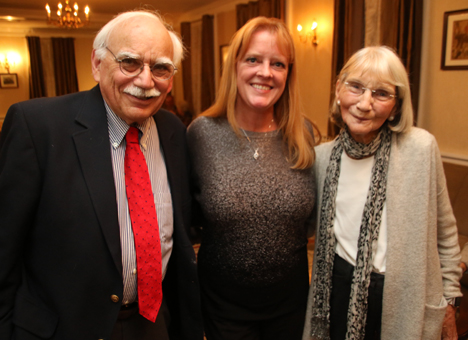 Two of the driving forces behind the successful 30-year history of the Litchfield Housing Trust were recognized for their contributions Thursday at the Litchfield Inn.

Bob Petricone and Joyce Briggs, who alternated as president and vice president of the organization for many years, were honored by the housing trust, state Sen. Craig Miner, R-Litchfield, state Rep. David T. Wilson and First Selectman Denise Raap.

Petricone, previously president, and Briggs, the previous vice president, have relinquished their duties but will remain in advisory roles.

“They have been instrumental in improving housing in Litchfield over 30 years,” housing trust Executive Director Jill Groody Musselman said.

Under the leadership of Petricone and Briggs, the nonprofit housing trust has created 47 units of affordable housing and is making plans to add eight more with its development of Gagarin Place on Torrington Road. Gagarin Place is named for Andy Gagarin, founder of the housing trust. Gagarin was the trust’s first president and yielded the position to Petricone.

The plan for Petricone and Briggs to step down had been in the works, according to Petricone.

“Joyce and I came to the conclusion that we were getting on in years and the organization needed to move on with some younger people,” Petricone said.

The new president is Rene Fisher of Litchfield, who as a former single mother once lived in a housing trust home. Selectman Jeffrey Zullo, who has served on the trust’s board of directors with Fisher, is now vice president. Fisher said she’s indebted to Petricone, Briggs and the housing trust and is honored to serve as president.

“Bob and Joyce are tremendous assets with the knowledge they possess and the resources they’re able to leverage,” Fisher said.

The terms of Fisher and Zullo are one year. Like Petricone and Briggs did in the early years of the trust, they plan to alternate as president and vice president.