Breakfast with Santa a success at St. Anthony’s 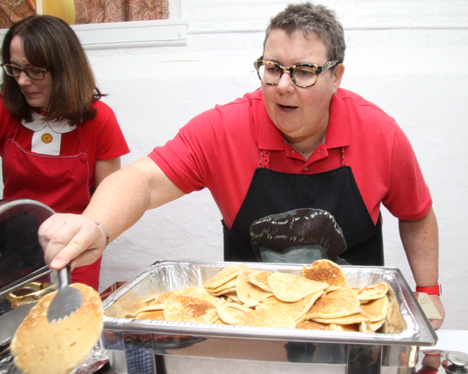 Mary McDevitt of Litchfield serves pancakes during the breakfast with Santa at St. Anthony of Padua Church on Sunday. BZ photos

Michael Lyn Cappello’s idea turned out to be a pretty good one.

Cappello organized a breakfast with Santa at St. Anthony of Padua Church in Litchfield on Sunday as a way to raise money for needy families, individuals and veterans in Litchfield with Christmas approaching. Support from the public was strong and the generosity made the event a success, according to Cappello.

“It’s a great show of community and Christmas spirit,” Cappello said. “People want to do their part to help at Christmastime and that’s why so many of them are here to show support.”

Volunteers who helped Cappello plan and execute the breakfast were her daughters, Laura Keller and Jenny Keller, Shannon Gollow, Pierce Daigle, Kirby Bunnell and several members of the McDevitt family. The cooking was done by Sunny Roper, Sherry Dean and Suzanne Clock.

Santa and Mrs. Claus stopped by for the event.

Breakfast organizer Michael Lyn Cappello and her husband, John, with their daughters, Laura, left, and Jenny.