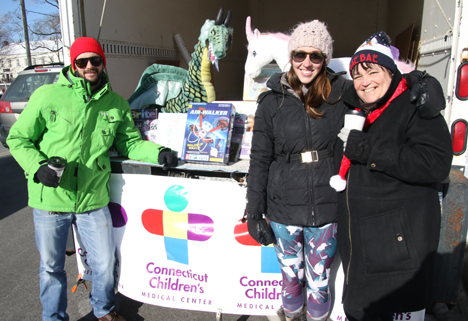 David Vincenzi of Litchfield, his girlfriend, Melanie Spath, center, and Linda Weik of Litchfield stood in the cold in the center of town on Saturday collecting unwrapped toys in memory of Vincenzi’s sister, Amelia, who died in 2013 after a long fight against an autoimmune disease. She was a senior at Litchfield High School at the time of her passing. Toys collected will be donated to the Connecticut Children’s Medical Center, where Amelia spent a lot of time undergoing treatment. Vincenzi, Spath and Weik will back at the post on Sunday as the collection continues. Cash donations are also being accepted. BZ photos