Terzian is new chairman of Litchfield school board 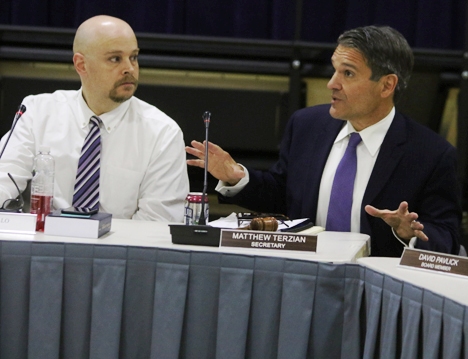 Matthew Terzian, the new chairman of the Board of Education, comments during the board’s meeting Thursday. To the left is the board’s new secretary, Steve Malo. BZ photo

The Litchfield Board of Education was unanimous Thursday in choosing Matthew Terzian to be its chairman for the next two years.

Terzian, a member of the board for two years, was nominated by board member John Morosani and was elected without opposition during the board’s meeting at Center School. There were no other nominations.

“I’m humbled and grateful and looking forward to fostering collaboration and consensus on the board,” Terzian said after the meeting.

The chairman’s job opened after former Chairman Gayle Carr concluded her final term on the board in November.

Terzian said he’s grateful to be able to work alongside Daniel Clock, who was re-elected vice chairman. Clock, too, received unanimous support from the board as he begins his eighth year on the board. Steve Malo, who was elected to the board in the November election, was the board’s unanimous choice to be secretary.

The new chairman will oversee a board that has entered unprecedented territory with the extent of its collaboration with Region 6, collaboration that is expected to increase now that Litchfield and Region 6 are sharing the services of one superintendent of schools, Christopher Leone.