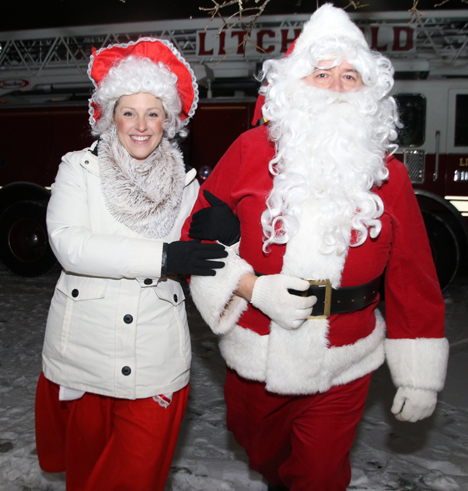 Santa and Mrs. Claus arrive on the Litchfield Green for the lighting of the tree on Sunday. BZ photos

With the help of some well-timed snow, the Christmas season arrived on the Litchfield Green on Sunday with caroling and the lighting of the tree.

The caroling and lighting were sponsored by the Parks and Recreation Department and were among a series of events in center of town that included ornament-making at the Litchfield Historical Society, storytelling at Litchfield Volunteer Ambulance, gingerbread-making at the First Congregational Church of Litchfield, and a lobby celebration at Union Savings Bank. The Litchfield Area Business Association and WZBG FM 97.3 also hand a hand in the festivities.

Several Litchfield High School students turned out on the snowy evening for a Christmas carol stroll up West Street that was led by the irrepressible Peter Tavino and parks and recreation Director Brent Hawkins The stroll wound through Cobble Court before making it way to the Green, where Santa and Mrs. Clause joined Russell Kracht, 10, of Litchfield, in lighting the tree.

Santa and Mrs. Claus had help from Russell Kracht, 10, of Litchfield, in lighting the tree.