Festival was a huge show of support for library 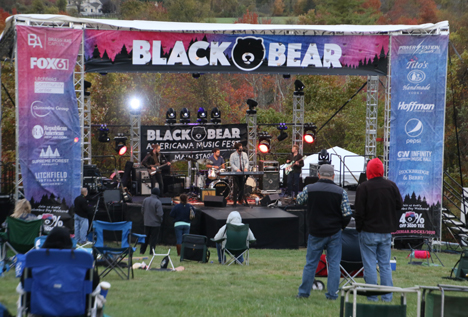 Among those living it up at the Festival of Trees at the Oliver Wolcott Library in Litchfield on Saturday night were, from left, Gib Sansing and Amelia and Lawrence Crimmins, all of Litchfield. BZ photos

Litchfield welcomed the Christmas season on Saturday night with the annual Festival of Trees fundraiser at the Oliver Wolcott Library, one of the best small-town libraries in the state.

Several hundred supporters of the library’s mission filled its rooms for a festive evening of friendship, food and drink, and bidding on dozens of silent auction prizes donated by generous individials and businesses. Several tastefilly decorated small Christmas trees made by volunteers were auctioned off as well.

The evening also capped a successful online auction of getaways to the Caribbean, Chicago and New York City.

Proceeds from the festival help cover half of the library’s anual operating budget and will be used to fund progams, services and the cost of new materials.

Colette Boyd reprised her role as chairman of the festival and was assisted by a large corps of volunteers who were in charge of the silent auction, decorations, the event’s program book, lighting and sound, the bar and other aspects of the festival. A crew of young volunteers maneuvered through the crowd serving appetizers.

Brigid and Mark Merriman, left, of Litchfield, and Nancy and John Newton of Warren.

Cleve Fuessenich of Litchfield demonstrates his versatility as a volunteer bartender.

Jillian Saunders of Litchfield was a volunteer server.

Declan and Deborah Murphy, left, and Emily Dalton, all of Litchfield.

Tom and Ann Marie McDermott of Litchfield and their granddaughter, Cecelia Marriott.

Jeff Wacker, left, and Cara and Ken Blazier, all of Litchfield.

Sarah Adams of Litchfield and her son, Malin, a volunteer server.

Jim Stedronsky and Nancy MacMillan, both of Litchfield.

Wilma Joas and John Cullen, center, both of Litchfield, and Father Tucker.

Steve and Michele Saunders and their daughters, Jillian, left, and Madeline.

John Newton of Warren served as master of ceremonies.