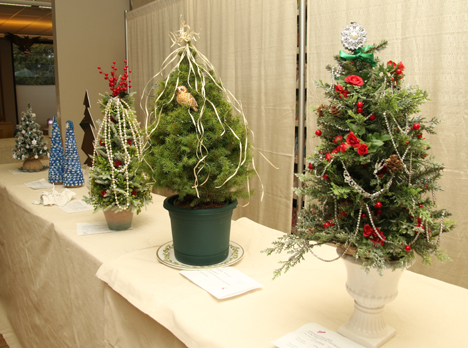 Some of the Christmas trees that will be available in a silent auction during the Oliver Wolcott Library’s Festival of Trees on Saturday. BZ photos

The Oliver Wolcott Library has been transformed into a party setting as it prepares to host the annual Festival of Trees fundraiser on Saturday night.

Long considered the kickoff to the Christmas season in Litchfield, the festival is the major annual fundraiser for the library and typically draws a crowd of several hundred for an evening of camaraderie, cocktails, hors d’ouevres and a silent auction featuring dozens of gifts and prizes donated by local individuals and businesses.

The library’s doors will open at 5 p.m. and the party will roll on until 8:30. Tickets are $75 and are available online at owlibrary.org.

Proceeds from the festival benefit the library’s operating budget, 50 percent of which comes from private sources to complement the balance provided by taxpayers. The support of the public has allowed the library to ear the rank of third in the state for adult per capita circulation.

The library is also sixth in the state for public computer usage and in the top 5 percent for children’s program attendance. An average of more than 200 patrons visit the library daily.

Volunteers led by Colette Boyd. chairman of the festival, decorated the library on Wednesday. More than 100 volunteers are involved. The library’s staff and board of trustees are supporting the effort as well.

The silent auction features 17 dinner parties donated by local residents. An online auction showcases a seven-night stay at a private home on the island of St. John in the Carribean and weekend getaways to New York, Chicago, San Francisco and Sedona, Ariz., and New York and Boston sports packages.