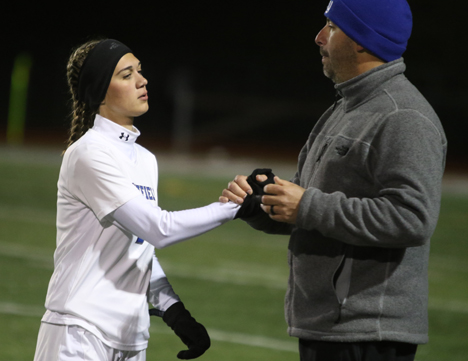 Litchfield’s Christina Orsini is greeted by assistant coach Brian Mongeau as she leaves the field following the Cowgirls’ 3-1 loss to Holy Cross-Waterbury in the Class S semifinals on Wednesday. Below, Allie Davenport works to gain control of the ball in the game. John McKenna photos
By John McKenna
BZ sports reporter
A strong season came to a close for Litchfield in the semifinals of the Class S girls’ soccer tournament on Wednesday night as the Cowgirls fell to Holy Cross-Waterbury 3-1 on the artificial turf at Naugatuck High School.
Quick and skilled, Holy Cross was too much for Litchfield on the fast playing surface, but Coach Mike Wilson’s team worked hard and gave the Crusaders all they could handle.
“I’m proud of they way they hung in against a very talented team,” Wilson said. “We have a fabulous group of seniors and they did a great job leading us tonight and all season.”
Holy Cross scored 10 minutes into the game, but Christina Orsini would tie it for the Cowgirls when she broke through the Crusaders’ defense and drilled a shot into the net. From that point until halftime, however, Holy Cross would dominate play.
The Crusaders scored off a corner kick that was inadvertently knocked into the goal by a Litchfield defender and took a 3-1 lead shortly before halftime as their speed and possession style began taking a toll on the Cowgirls.
“A couple of defensive mistakes put us in a hole, but other than that I thought we played well in the first half,” Wilson said.
The second half saw Holy Cross pepper Litchfield goalie Molly Lennon with shots. Lennon was up to the task, though, and kept turning away the shots with help from the likes of Roxanne Snowden, who on one Holy Cross scoring threat raced toward the goal to kick away a ball headed for the net after Lennon had ventured outside the pipes.
A last scoring chance for Litchfield saw Orsini break in on the goal and shoot wide while heavily defended.
Jeremina Prenoveau, above, eyes the ball for Litchfield. Below, goalie Molly Lennon gets into position to break up a Holy Cross scoring threat.
It was the final game for Orsini, who finishes her career as Litchfield’s all-time leading girls’ scorer, Snowden, Allie Davenport, Lucy Kraut, Aileen Lennon, Francesca Luzzi and Landrie Spelman.
The seniors were all key contributors on a team that finished 14-4-1. Davenport, who developed into a major scoring threat to compliment Orsini, Snowden and Luzzi provided leadership as captains.
Luzzi, a stalwart at midfield, will remember the season as one in which her team never let adversity get the best of it.
“This was a really special season because everyone wanted to work together and be sucessful,” Luzzi said. “We had a strong group of seniors and a pool of underclassmen that came in and played great.”
Wilson, too, was pleased with the season that saw Davenport, freshman Camilla Seymour and sophomore Jeremina Prenoveau become scoring threats to take the pressure off Orsini.
“We had a lot more scoring options, younger girls stepped up, and our older girls worked hard and were leaders,” Wilson said. “That made it a top-notch year.”
Aileen Lennon clears the ball.
Ella Demers uses her head.
Francesca Luzzi settles the ball.
Anna Devaux clears the ball from Litchfield’s defensive zone.
Roxanne Snowden delivers a header.
Goalie Molly Lennon punches a shot over the goal.
Roxanne Snowden prevents a goal.
Molly Lennon charges out of the net to break up a scoring attempt.
Aileen Lennon gets to the ball first.
Camilla Seymour tracks a ball headed her way.
Christina Orsini (7) challenges for the ball.
Molly Lennon makes another save.
Allie Davenport fights for possession.
Back to Sports