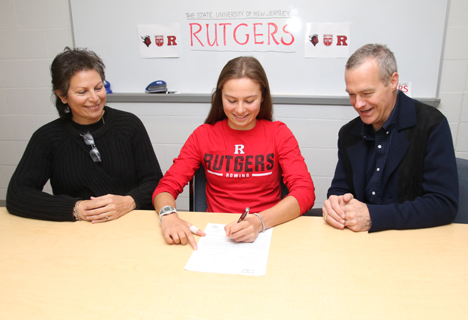 Litchfield High School senior Ruby Hatfield last week signed a national letter of intent to attend Rutgers University, where she will compete with the crew team. Watching are her parents, Visko and Sharon. Below, Ruby’s twin brother, Zeke, joins his sister and parents. Ruby trains and competes with the GMS Rowing Club in New Milford and has been rowing since she was in the seventh grade. She is president of the LHS National Honor Society, is a member of the school jazz band, and volunteers in the community. Rowing for a Division I program, Ruby said, has been her goal. Rutgers is a member of the Big 10 Conference. John McKenna photos