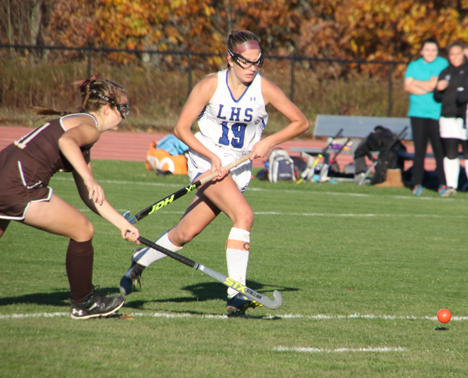 Litchfield’s Casey Small, right, is shown in action against Thomaston earlier this season. The two teams played to a tie on Wednesday. John McKenna photos

Litchfield and Thomaston settled nothing on the field hockey front on Wednesday when they played to a 2-2 tie that left each team with a share of the Berkshire League championship.

The hard-fought game went to a 10-minute overtime that ended without a winner. Both teams finished the 8-1-1 in the league. Litchfield’s only loss was inflicted by Thomaston, 1-0, in October, while Thomaston’s lone defeat came at the hands of Wamogo.

Litchfield took a 2-0 lead on goals by Brook Small and Casey Small in the first half but couldn’t hold the advantage as Thomaston fought back with a goal just before halftime and the equalizer with 24:16 left to play.

Below, Litchfield’s Samantha Barnes, moving the ball in the first game against Thomaston, was a key part of the Cowgirls’ success.