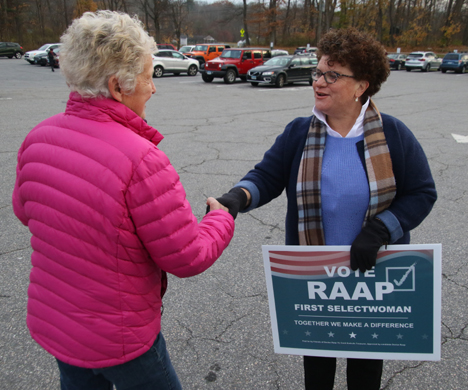 A long line formed early at the Litchfield firehouse as Election Day unfolded Tuesday and brought voters out in droves for one of the most interesting races in town in years.

Business at the firehouse polling place was especially brisk between the polls opening at 6 a.m. and 9 a.m. First selectman candidate Denise Raap, a Democrat, cast her vote at 7:30 a.m. and her opponent, Selectman Jon Torrant, a Republican, did the same about one hour later.

Raap and Torrant are vying for a seat being left open by the pending departure of First Selectman Leo Paul Jr. Both have run energetic campaigns in their bids to convince voters that they are right choice to succeed Paul. It’s the first race for an open first selectman’s seat since Paul routed Kevin Creed in 2003 to begin his eight-term run.

First selectman candidate Jon Torrant, right, and his running mates for the Board of Selectmen, Bill Burgess, left, and Tom Waterhouse campaign at the corner of West Street and North Street early Tuesday.

Jon Torrant and Ina Williams of Litchfield chatted even though they are on different sides of the election.

Denise Raap and her husband, Greg, check in at the polls at the firehouse.

Jon Torrant receives his ballot at the firehouse.

Board of Education candidates David Foss, left, and Steve Malo outside the firehouse.

Nancy Rogers of Litchfield was up early to show her support on the Green.