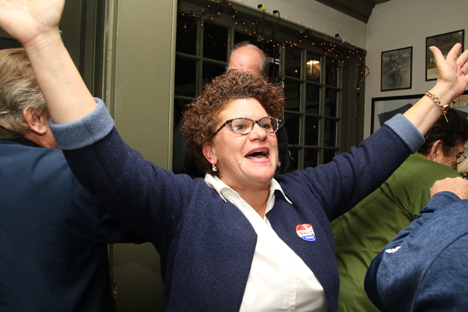 Denise Raap celebrates at the Village Restaurant after winning the race race for first selectman on Tuesday. BZ photos

Democrats in Litchfield scored a huge victory on Tuesday as Denise Raap secured the first selectman’s seat with a win over Selectman Jonathan Torrant and Selectmen Anne C. Dranginis and Jeffrey Zullo were returned to office with impressive vote totals.

“I’m so excited about the opportunity we have in Litchfield,” Raap said. “We’re going to be good stewards of the town.”

That Raap won was not a surprise, but her margin of victory was. In Torrant, she was facing an experienced selectman and a community volunteer who is well-respected in town. Consenus heading into the election was that the race would be a nail-biter.

Raap’s aggressive and positive campaign and use of social media turned out to be game-changers.

“I thought it would be closer, but we had a lot of support from the younger generation and I think that was the difference,” Raap said.

Dranginis won her first full term with 1,833 votes and Zullo secured a fifth term with 1,737 votes. The Republican selectmen candidates, Thomas Waterhouse and Bill Burgess, were left in the dust with 1,242 votes and 1,228 votes, respectively.

Torrant’s vote total would allow him to remain on the board. He’s uncertain if he’ll do so however. Assessing the election result, Torrant said the Republican campaign in the end was no match for the one the Democrats ran.

“We tried but (the Republican Town Committee) didn’t do a good enough job,” Torrant said. “We tried to touch all of the bases, but obviously missed a few.”

Denise Raap and her husband, Greg, right, in a celebratory moment. Below, Raap with her running mates, Selectmen Jeffrey Zullo and Anne C. Dranginis.