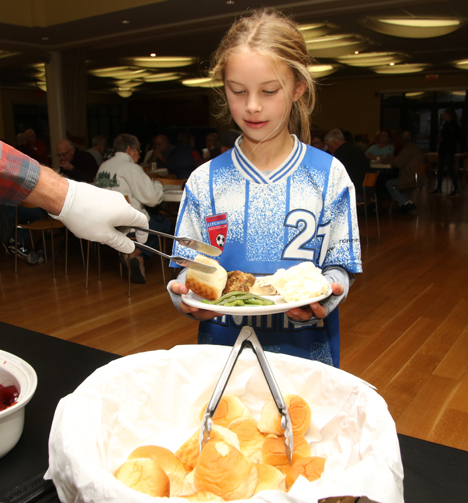 Charlotte Foss, 8, of Litchfield, is served at the United Methodist Church of Litchfield and Bantam dinner at the Litchfield Community Center on Saturday. BZ photos

The United Methodist Church of Litchfield and Bantam continued its resurgence on Saturday by hosting a well-attended fundraising turkey dinner at the Litchfield Community Center.

Church congregants, the Rev. Ed Horne and volunteers teamed up to serve a dinner that satisfied all appetities. The main course was topped off by an array of desserts made by congregants,

The dinner was held at the communty center for the first time after calling the church home for many years. A new site was needed because the church is being used for storage by Prime Finds, the pop-up store that will open this month in the former Murphy’s Pharmacy.

Jim Strub, who heads the church’s board of directors, thanked the community center for accommodating the dinner.