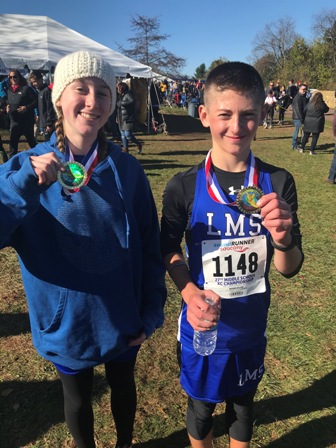 In the West B race, the Litchfield eighth-grade duo of Jenna Sobek and AJ Quesnel dominated their races over the 1.7 mile course, with Sobek winning in 11:54.72 and Quesnel cruising in 10:16.78, almost a minute ahead of second place. There were 273 finishers in the girls’ race and 354 in the boys race. Also finishing in the top 10 for the LMS girls was Ella Anderson. Second runner for the boys was Luke O’Mara in 41st.

The meet also allowed state running clubs to compete as well. In the Boys West B race, two sixth-graders were medal winners. Litchfield Track Club runner Ben Schildgen of Northfield placed 19th in a time of 11:34.19 and the LTC’s Caleb Johnston, also of Northfield, placed 31st in 11:46.41.

Many of the runners who raced will converge on White Memorial Conservation Center next Sunday for the USATF Connecticut Association Junior Olympic Cross-Country Championships.