World War I soldier is Post 44 veteran of the month 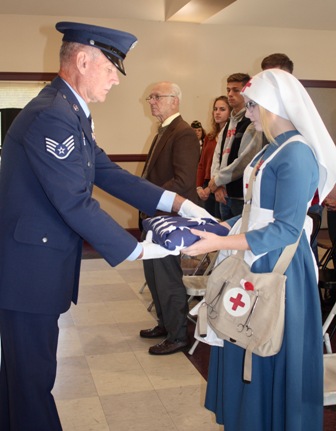 Dan Thurston, representing American Legion Post 44, accepts a flag from World War I nurse re-enactor Michaela Spring of Oakville during the post’s veteran of the month service on Saturday. Eileen Schmidt photos
History was observed in Bantam on Saturday as American Legion Post 44 celebrated the 30th anniversary of its veteran of the month program and the 100th anniversary of the post’s founding.
The post’s veteran of the month service at Bantam Borough Hall recognized Robert P. Jefferies, an Army veteran of World War I and the soldier the post was named for when it was established in 1919.
Post 44 was originally chartered the Robert P. Jefferies Post 44 of the American Legion. Years later it was renamed the Tyler, Seward, Kubish Post 44 of the American Legion.
Jefferies was born in Brooklyn, N.Y., on June 25, 1891, and with his parents, George and Emily Jefferies moved to Bantam. Robert Jefferies worked for the Trumbull Vanderpoel Co. in Bantam.
At the age of 26, Jefferies registered for the draft in 1917 and went through basic training at Fort Devens, Mass., before being sent to Camp Gordon in Atlanta, Ga. Jefferies would never make it out of Camp Gordon, however, as he came down with the flu and died on Jan. 19, 1918. His death came during a global flu epidemic that killed up to 100 million people.
Jefferies is buried in the Bantam Cemetery.
A cake was made to mark the anniversaries of the veteran of the month program and Post 44.
Participants in the veteran of the month service gather afterwards.
Litchfield High School National Honor Society students Samantha Barnes, Brody Stevenson, center, and Tim Donovan helped Post 44 set up the Bantam Borough Hall for the service.
Back to News