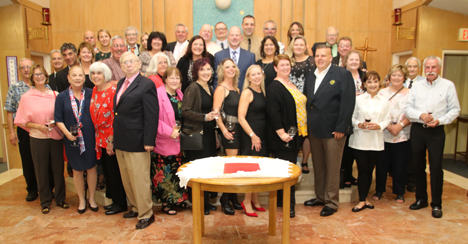 Above, representatives of the Possum Queen Foundation at Wednesday’s Wisdom Awards celebration at the Wisdom House Retreat and Conference Center. Billy Neller, president of the foundation, received a Wisdom Award at the 21st annual event.

A festive tradition resumed at the Wisdom House Retreat and Conference Center on Wednesday with the presentation of the 21st annual Wisdom Awards.

Recipients were John and Lynn Fulkerson of Litchfield, a pair of stewards of the environment, and Bill Neller on behalf of the Possum Queen Foundation, which has given away hundreds of thousands of dollars to local individuals and families facing medical hardships.

John Fulkerson, a nationally-recognized orthopedic surgeon, is a member of the Litchfield Land Trust, the author of a book on organic farming, and a musican with the Western Lands Trio, a local band that celebrates the environment. Lynn Fulkerson focuses on justice and sustainability through her environmental ministry with the Episcopal Diocese of Connecticut, has worked to ban the disposal of fracking waste, co-founded the Litchfield Energy Task Force and the Inter-Religious Eco-Justice Network, coordinates an Earth film series at the Church of Christ Congregational in Goshen, helped establish the Goshen Green Garden, and is a member of the League of Women Voters of Litchfield County.

Neller, co-founder of the Possum Queen Foundation, accepted the award on behalf of the many volunteers who have helped him turn the foundation into a fundraising juggernaut that has assisted dozens of local individuals and families facing unexpected medical issues.