Ideas bounced around in forum on plan for Green 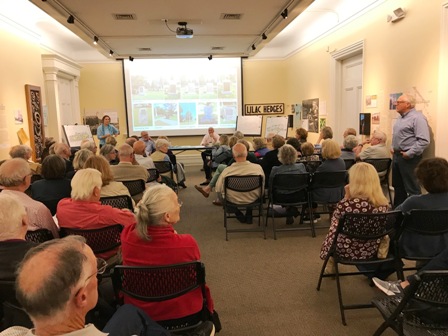 Heritage Landscapes architect and planner Patricia M. O’Donnell talks about the Green during a public forum at the Litchfield Historical Society on Tuesday. BZ photo
A public forum on a revitalization plan for the Litchfield Green drew a large crowd to the Litchfield Historical Society on Tuesday.
About 50 residents and town officials turned out for the forum that was held by the Borough of Litchfield’s Board of Warden and Burgesses and provided opportunity for public input on a plan being developed by Heritage Landscapes, a firm with offices in Connecticut and Vermont.
The plan is being funded by a grant from the Seherr-Thoss Foundation. Implementing it would be funded by grants and private donations, borough Warden Dirk Patterson said.
Heritage Landscapes architect and planner Patricia M. O’Donnell told the gathering that all options would be considered for the landmark Green that is one of the major symbols of Litchfield’s history.
Armed with input from the forum and working with an advisory committee consisting of Patterson, residents Bruce Schnitzer, Stacey Kavle, Jonathan Wilson and Michael Reardon, and the historical society’s executive director, Catherine Fields, Heritage Landscapes will spend the next five months developing a revitalization plan for consideration.
Who will consider the plan has yet to be determined, according to Patterson. Selectman Jeffrey Zullo, who attended the forum, said that since the Green is owned by the town, even though it is maintained by the borough, town residents should have a say.
After a presentation on the history of the Green and its evolution, as well as talking about the 70 trees on the Green and the state of their health, O’Donnell opened the floor to comments from the public.
Resident Cleve Fuessenich said consideration should be given to moving the war monuments from the center Green to the east Green to provide more room for memorial events and to make better use of the east Green. Improving drainage on the east Green was also suggested, as was building a gazebo on the west Green and eliminating the road between the center Green and west Green.
Back to News