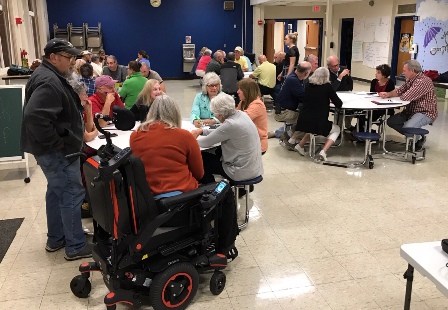 Participants work in groups during an economic development planning discussion in Goshen. BZ photo
Goshen’s effort to create a five-year plan of economic development for the town got started with a roundtable discussion on Thursday.
The meeting drew about 50 residents and town officials to Goshen Center School and was led by Courtney Hendricson, vice president of municipal services for the Connecticut Economic Resource Center.
CERC is being paid $10,000 by the town to develop a plan of conservation and development and was given plenty of feedback during the discussion. The input will aid in the development of the plan that would serve as an advisory document for town boards and commissions.
Participants in the roundtable discussion broke into small groups to talk about what they like and dislike about Goshen. The answers were compiled and kept by CERC. Everyone agreed that the town’s rural character is a major like. Low taxes, high rate of volunteerism, a family-friendly atmosphere, and a sense of community were also mentioned.
Mentioned as dislikes were a lack of dining diversity, an inability to walk safely in the center of town, no mass transit, and no bike trails. The objective of the process with CERC is to create a plan for economic development that would complement Goshen’s rural and small-town character.
Back to News