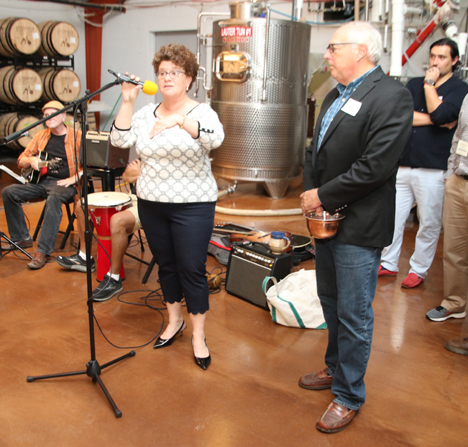 Litchfield’s Democratic Party slate stressed a need for doing tings differently n town during a fundraiser at the Litchfield Distillery on Thursday.

“The biggest thing people want is change,” first selectman candidate Denise Raap told the crowd. “This field of candidates is the strongest we’ve had in years and can make change happen. This is a great opportunity to switch some Republican voters and elect a Board of Selectmen that will listen to the people and solicit input.”

Raap is facing Selectman Jonathan Torrant, a Republican, in the election. Her running mates, Selectmen Anne C. Dranginis and Jeffrey Zullo, also spoke of the opportunity Democrats have to reshape the way the board deals with the public.

Other speakers were Board of Education candidates Steve Malo and David Foss and Planning and Zoning Commission candidate Carol Bramley.

Democratic candidates for the Board of Education, Steve Malo, left, and David Foss spoke. Below, Selectman Jeffrey Zullo promotes the Democratic slate. Looking on are, from left, Planning and Zoning Commission candidates Carol Bramley and Bill Conti and Selectman Anne C. Dranginis.